Due to human caused acceleration in global climate change the world is seeing an increase in naturally occurring phenomena, magnified by human effects. One of these phenomena is the presence of larger and more widespread algal blooms, or more concerning harmful algal blooms (HAB). This exponential growth of algal colonies in a water system can devastate the local wildlife and viability of the water, leading to anoxic conditions and so-called “dead zones.” The cause of these algae blooms is generally considered to be the culmination of a set of ideal conditions. Notably, the presence of large amounts of nitrogen and phosphorus rich nutrients, known as eutrophication, can lead to extreme algae blooms. Often times, these nitrates and phosphates reach the water system due to runoff from agricultural and urban runoff.

The Smart Algae Bloom system is intended to serve as a network of sensor nodes along freshwater inland waterways specifically for the purpose of predicting and detecting the possibility and severity of algal blooms. The intended purpose of the monitoring device is to serve as a multifold system, relying on modularity to increase the ability to adapt to specific mission parameters. The system is can be outfitted to monitor waterways for long-term data collection requiring a certain data set, but may also be deployed at a specified area for more precise data collection, all based on the same operational platform. Strategic deployment of monitoring buoys will allow for localization of source regions and at high risk. Furthermore, over the duration of time, a predictive model of factors will be accumulated, allowing for a Deep Neural Network to evaluate risk levels of water compositions, predict possible events, and allow for actionable intervention.

Each individual sensor-node is intended to carry a specified payload through the functional modular system (FMS). Doing so allows for precise data collection, all while avoiding excessive cost and over-generalized water quality data. For long-term waterway monitoring, each node will be equipped with basic sensors such as pH level, multi-depth temperature sensors, turbidity (TSS) sensor, Total Dissolved Solids (TDS) sensor, and conductivity test. The unit may come equipped with a selection of surface sensors, such as temperature and barometric pressure, as these effect algal growth and distribution. TDS sensors will indicate high levels of phosphates and nitrates, both indicative of possible eutrophication events.

Depending on payload selection, more specialized sensors will be installed using the FMS layout. In the event of a eutrophication event and explosive algal growth, a unit may deployed premeditatively (based on partition analysis by network of other sensor nodes on water) at the specific location of the event. This unit will be equipped with additional sensor modules, such as a spectral fluorometer to determine algal biomass, or a spectrophotometer for wavelength absorption analysis of chlorophyll, or other passive or artificial optical measurements, most of which rely on properties of wavelength absorption and beam attenuation and scattering.

Sensors are controlled by the nodes microcontroller, such as a Arduino UNO, a common low cost MCU with a user-friendly IDE. Collected data is sent through the connected LoRaWAN module, which uses LoRa to transmit the data packets through the Peer-to-Peer network to reach a LoRaWAN Gateway. LoRa is ideal for this application due to it’s low-power consumption and high coverage area. The only drawback is the low bandwidth, which is not a concern since it is not expected that the system offer continuous live feedback. The Gateway will simply be a LoRaWAN receiver connected to a Rasberry Pi Microprocessor connected to the internet. The data packets are then processed and uploaded to the database accordingly.

The fundamental of Data Processing include extraction, preprocessing, filtering, computation, and visualization for the end-user. The raw data is downloaded from the Cloud and is separated by each sensor nodes Unique Identifier (UID). The critical step of preprocessing removes unwanted noise attributed to sensors, as well as eliminating defective data uploaded by the Gateway. Filtering allows for data sorting depending on user specified requirements, which is then filter into a computation model. Computational modules are composed of sub-modules, intended to separate the nodes data into Classification modules of each individual sensor. These can then be used to compute waterway identifiers and properties (WIP) individually. Finally, visualization takes the computed (WIP) and displays it in an insightful manner to the end user.

Create a balance between low-cost and high durability. Exterior hull of monitoring units can be manufactured by use of common materials such as polymeric coated foam, composite materials such as fiberglass or carbon fiber. Units are scalable for intended use and environmental conditions, retaining the FMS capability. Units are easily deployed and can be assembled on location. There currently exists no such device intended to create mesh network. Waterway networks could ensure societal accountability of sources of high waterway runoff, benefiting the ecological pyramid from the bottom up. 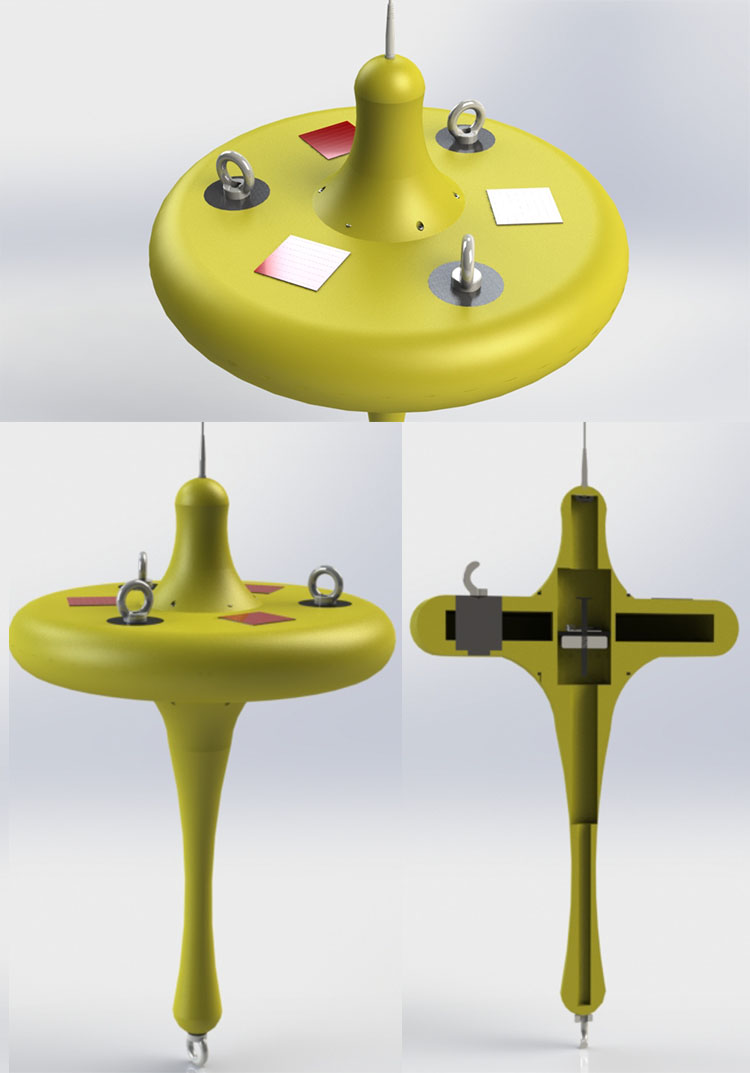 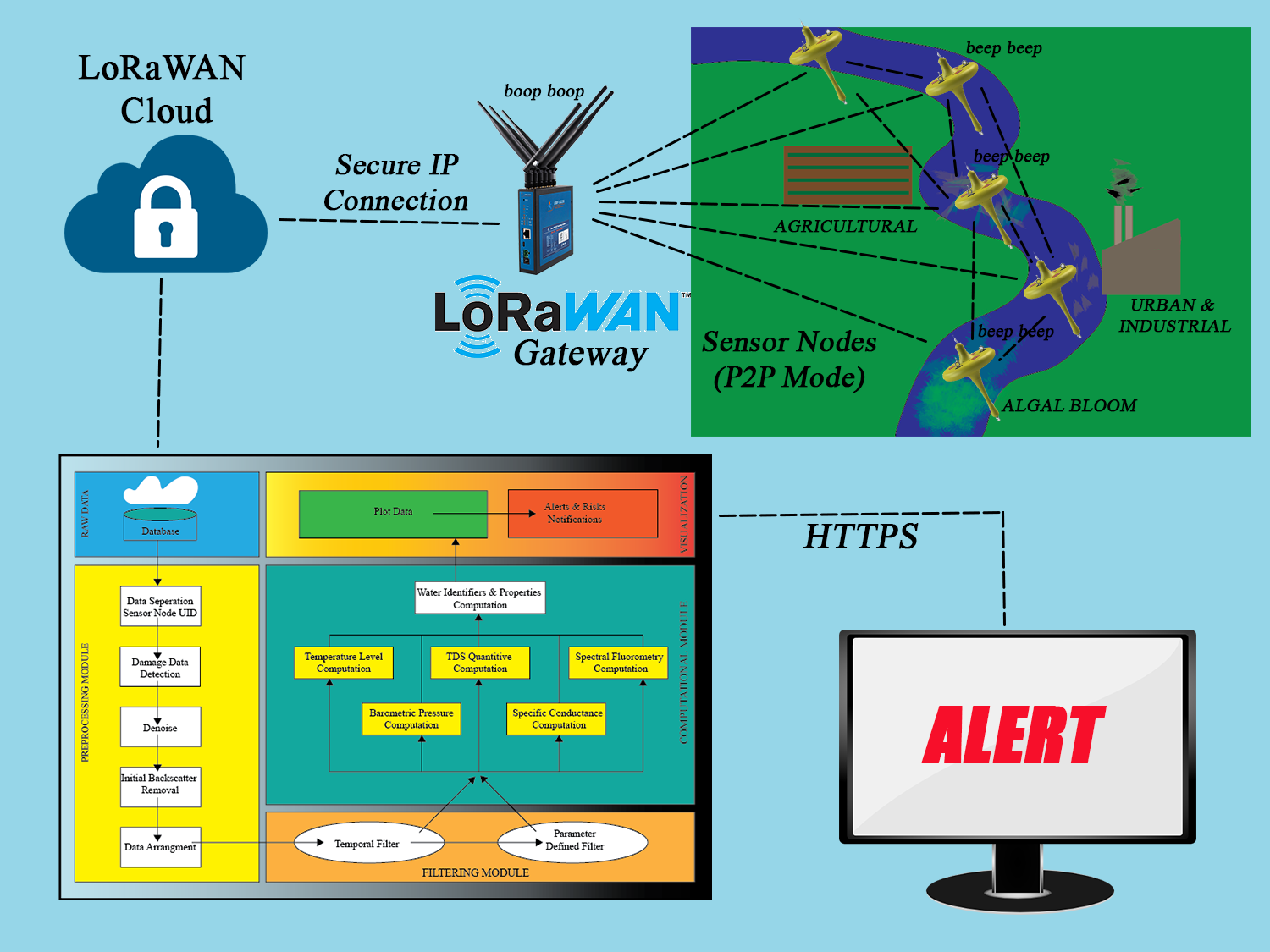 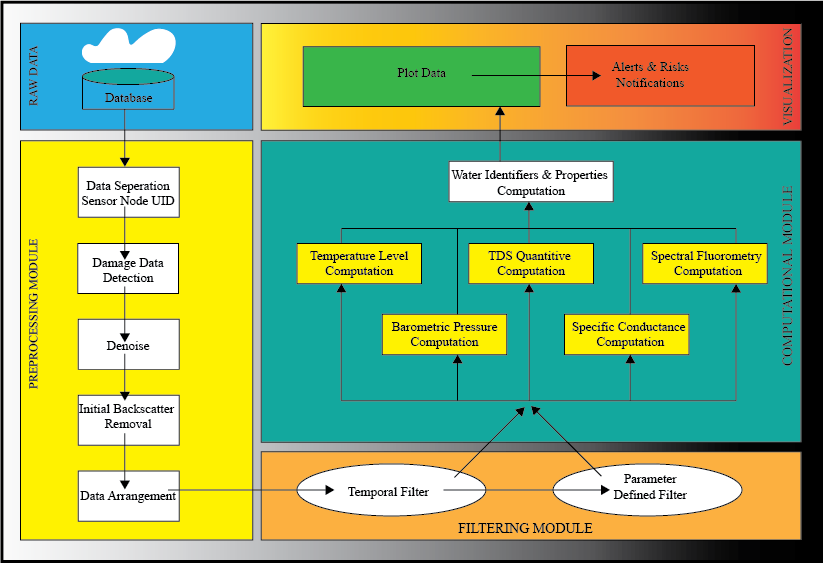 As far back as I can recall, I have always known many local lakes and rivers being affected by algae blooms. Often times, the same lakes would have blooms of blue green algae every year, forcing municipalities to close them for public safety. Algae blooms will only keep intensifying as the global temperatures increase, affecting larger sections of critical waterways for both human consumption and ecological habitats, and so I believe people should have access to information regarding exactly what is occurring in their water sources. Perhaps a better understanding of the growth of algae strains in natural waterways may motivate both government and industry to pursue controlled algae cultivation either as a principal product or carbon-neutral byproduct. If managed correctly, the utility of algae can potential out-way the increasing side effects, all while reducing the environmental footprint.