As the world becomes increasingly connected through the Internet of Things (IoT) revolution, connected homes are rising in popularity for convenience and entertainment purposes. However, only a limited number of such systems have been developed to increase environmental sustainability. Water quality affects the majority of our food sources, as well as the well-being of the local land and aquatic species. If left unmonitored, entire ecosystems can collapse, causing the destruction of natural habitats. This will endanger communities’ quality of life, as factors such as air quality is negatively impacted. Natural waterways are also commonly depended upon for irrigation and drinking, which further increases the dangers of water pollution.

Our focus is to develop a solution that does not rely on government action, but instead empowers proactive tinkers to improve their community’s safety by providing a system that is low cost and open-sourced. This water-monitoring IoT system costs significantly less than competitors’ products and provides an accessible solution with small anchored sensors, a lightweight collector device that negates the need for modems, and a user-friendly website for displaying data and analytics. This will prove extremely valuable to communities that lack both the resources and the government aid to maintain a healthy standard of living. To adhere to the philosophy of improving communities’ safety, we also plan to implement multiple security measures to protect the data.

The framework contains three independent, connected components. The first component is the sensor that will float in the body of water. At its core is an Adafruit HUZZAH ESP8266 Breakout WiFi microcontroller, which functions as an on-board computer. We chose it over the Raspberry Pi Zero, because the Zero consumes 100 mA at 5V when idling (which results in an estimated 12Wh energy consumption) and requires a 2 sq ft (35W) solar panel. However, the ESP8266 consumes about 100 mA at 3V in TX/RX mode. and can be put to sleep in various modes. With deep sleep, it only consumes 20 uA at 3V. To ensure adequate battery life, the ESP8266 will be connected to a lithium polymer battery that is charged with small solar panels. According to our estimates, a suitable battery would have 9Wh and be charged by a 0.1 sq ft (1.2W) solar panel. This should be sufficient to satisfy the one-year battery requirement. A turbidity sensor will protrude from the waterproof sensor enclosure. It measures particle suspension using light transmittance, and thus is sensitive to light. To combat this, a pipe will encircle the sensor to ensure a dark environment. An anchor will also be attached to the enclosure, and we also hope to attach a tracking beacon to the portion of the enclosure that floats above the water. The sensor remains in the deep sleep mode to save energy and wakes up once a week to send data and battery health information to nearby collector devices. It also completes it measurements over a small time period once a day. MQTT is used to transmit this data to a collector using wifi. Other sensors will be implemented in the future, but turbidity is used for the current proof of concept.

The collector device is small and lightweight. It is intended to be carried by any mobile unit, such as a person or a drone. A Raspberry Pi Zero is used as an on-board computer since the collector’s power requirements are not as constrained as the sensor. Once the collector comes within range of a sensor during a predetermined data transmission period, it will receive the sensor’s data through MQTT and store it in on-board memory. An operator can then SSH (chosen for enhanced security) into the collector to retrieve the data and upload it to the user interface.

By designing a website that is publicly accessible and ensuring data integrity through security measures, our project will be a valuable asset to anyone concerned about their water supply. The data will be displayed in such a way that the user will not need a strong technical background to understand the results. In the final stages, we also hope to implement algorithms that evaluate the recorded data and produce useful graphs and insights which will also be made available on the user interface. We depend on electrical components that are relatively low-cost, easily accessible, and available at bulk discounts. These materials are also popular among amateur engineers and well documented in online resources. The current bill of materials recently surpassed $100 and is expected to reach up to $200 without including materials already made available by the sponsor. For mass production, this system can prove to be an extremely affordable solution for monitoring water quality.

Currently, we have a working prototype in which a sensor powered by the battery and solar panels is able to successfully transmit turbidity and temperature data via secured MQTT to a collector mounted on a manually-piloted drone. In the coming weeks we will be developing the website and implementing the algorithms needed to make useful inferences about the gathered data, as well as add additional security measures. 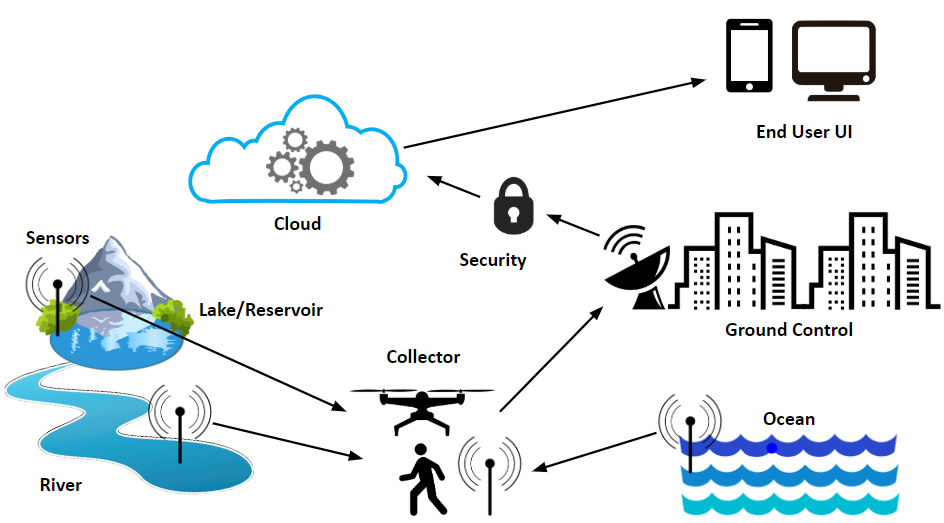 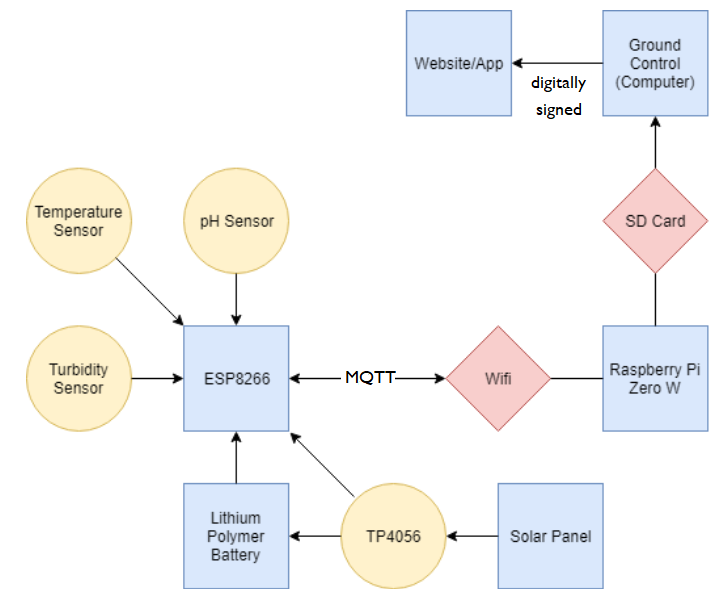 Our university requires a final engineering project in place of a thesis for graduation. Our team gathered in hopes of combining our varoius specializations in circuit design, signal processing, computer systems design, and machine learning to develop a comprehensive system capable of being built by students and easily deployed. Our mentor recommended the Keysight Challenge as an appropriate goal to help us focus the project. We were excited to learn of the challenge, as many engineering resources on our campus are sponsored by Keysight.