Water pollution has seen a constant rise with increase of industries. The polluted water can damage individual species and impact the natural biological communities they are part of. The causes of water pollution include a wide range of chemicals and pathogens as well as physical parameters. Contaminants may include organic and inorganic substances. Elevated temperatures can also lead to polluted water. A common cause of thermal pollution is the use of water as a coolant by power plants and industrial manufacturers. Elevated water temperatures decrease oxygen levels, which can kill fish and alter food chain composition, reduce species biodiversity, and foster invasion by new thermophilic species. Contaminants may include organic and inorganic substances. Inorganic water pollutants decreases pH released by industrial discharges. Water pollution, unlike chemical pollution, results in a change in the physical properties of water. By 2025, it is estimated that half of the world’s population will be living in water stressed areas. It is estimated that nearly contaminated water kills 1 person every 4 hours. These alarming facts bring out the immediate need for a solution that will ensure people consume clean water, and are aware of the contents of the water delivered to them.

In this project we present the design and development of a low cost system for real-time monitoring of the water quality in IoT. The system consist of several sensors for measuring physical and chemical parameters of the water. The measured values from the sensors will be processed by a core controller. The controller will update an online database with the collected data which will allow the end users as well as the utilities to view it on a web interface as well as on a mobile app, allowing the users to decide easily how safe the water is for various uses.

In the 21st century, there were lots of inventions, but at the same time were pollution, global warming and so on being formed. Because of this there is no safe drinking water for the world’s pollution. Water quality monitoring in real time has become critical with the increasing amount of pollutants in the water discharged from various industries.

The parameters which are measured:

1. pH: Pure water has 7pH value, less than 7pH has acidic, more than 7pH has alkaline. The range of pH is 0-14 pH. For drinking purpose it should be 6.5-8.5pH.
2.Turbidity: The turbidity of healthy water should not be more than 5NTU,and should ideally be below 1NTU.
3.Salinity :The salinity of water with total dissolved solids(TDS) level of less than about 600mg/L considered to be healthy water. It should not be more than 1000mg/L.
4.Temperature: The temperature of healthy water ranges from 16⁰C-25⁰C(60.8F-77F).

pH sensor: The pH of a solution is the measure of the acidity or alkalinity of that solution. The pH scale is a logarithmic scale whose range is from 0-14 with a neutral point being 7. Values above 7 indicate a basic or alkaline solution and values below 7 would indicate an acidic solution. It operates on 5V power supply and it is easy to interface with arduino. The normal range of pH is 6 to 8.5.

It is a measure of the cloudiness of water. Turbidity has indicated the degree at which the water loses its transparency. It is considered as a good measure of the quality of water. Turbidity blocks out the light needed by submerged aquatic vegetation. It also can raise surface water temperatures above normal because suspended particles near the surface facilitate the absorption of heat from sunlight.

Arduino is a microcontroller board based on the ATmega328P. It has 14 digital input/output pins (of which 6 can be used as PWM outputs), 6 analog inputs, a 16 MHz quartz crystal, a USB connection, a power jack, an ICSP header and a reset button. It contains everything needed to support the microcontroller. Arduino Software (IDE) was the reference versions of Arduino, now evolved to newer releases. The Uno board is the first in a series of USB Arduino boards, and the reference model for the Arduino platform; for an extensive list of current, past or outdated boards see the Arduino index of boards.

The salinity sensor easily and precisely measures the total dissolved salt content in an aqueous solution. Measures water with a wide variety of salinities,from brackish water to ocean water and even hypersaline environments.

The ESP8266 Wi-Fi Module is a self contained SOC with integrated TCP/IP protocol stack that can give any microcontroller access to your Wi-Fi network. The ESP8266 is capable of either hosting an application or offloading all Wi-Fi networking functions from another application processor. Each ESP8266 module comes pre-programmed with an AT command set firmware. 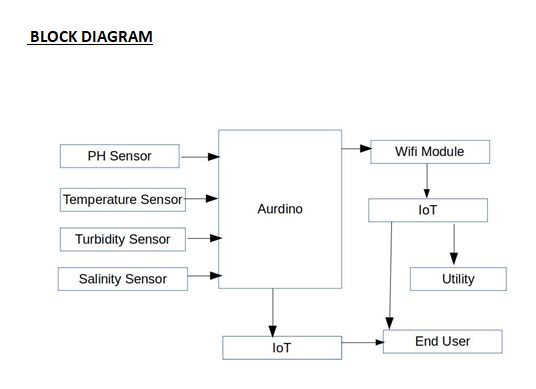 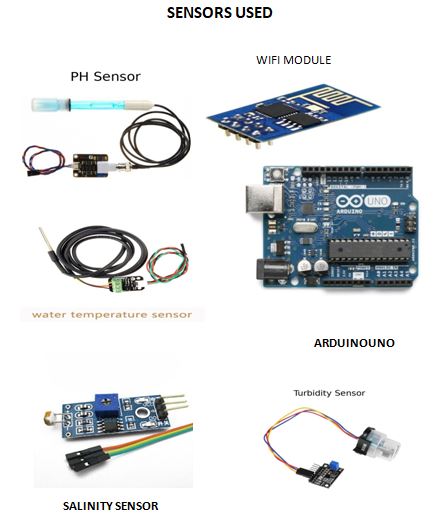 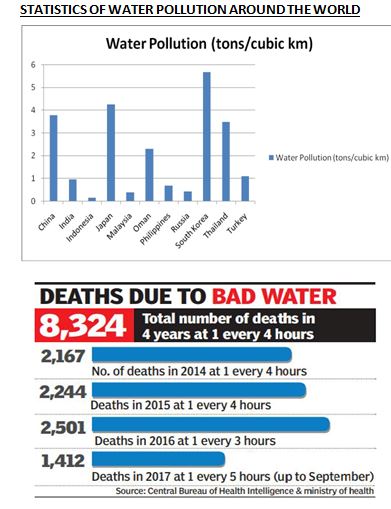 As the world is suffering from the shortage of one of the majority resources called water where it is highly polluted and the statistics tell that day by day, year by year there is spreading of diseases due to polluted water. This made us think of a project where the water from the distribution center is directly sent in healthier form to the consumers by sending the notifications which helps a comman man also to know about the purity of the water which he is using.