The gradual increase of the usage of fertilizers in modern agricultural industries has led to escalated amounts of phosphorus and nitrogen (chemicals from the fertilizers) to flow into the seas from the river nearby plantations, which eventually encourages and helps the growth of algae excessively, resulting in the proliferation of the number of algae decay, requiring oxygen for the decaying process thus the occurrence of oxygen depletion. This phenomenon will result in the death of most, if not all, aquatic creatures living in the affected zones, infamous by the term dead zones.

It has been commonly known that fish are important to mankind in many different aspects that include: a source of living, a vital protein provider and a crucial animal in the food chain. This is primarily the reason we created Mavic Ace - to save the marine life that has always been threatened by various fatal problems; dead zones, to name one.

The aquatic hypoxia caused by this cycle plays an important role in not only decreasing marine life rapidly ; it also increases the acidic levels and temperature of the ocean as the carbon dioxide levels skyrocket and the oxygen levels deplete. The eutrophication process is the main contributor to this problem. When the algae growth escalates, they cover the surface of the water and disallows aquatic plants to photosynthesise as sunlight and oxygen are blocked form entering the water.

Mavic Ace, functions to help overcome this problem by cleaning the algae and decreasing the overall population of the algae In the affected areas by help from MPC buoy that create by LG Sonic. Mavic Ace was specially designed with ultrasonic sensor that produce sound waves with frequencies higher than the upper audible limit of human hearing (22 kHz) known as ultrasound.

Cyanobacteria use gas vesicles for buoyance and depth regulation. During the day, algae are photosynthesizing in the top layer, using carbon dioxide and dissolved nutrients from the surrounding water to produce oxygen and polysaccharides. At night, the cyanobacteria cells empty their gas vesicles (vacuole) to sink to the bottom and use oxygen and nutrients to produce biomass. Ultrasound waves create a sound layer in the top layer of the water. The sound layer has a direct impact on the buoyancy of the algae. The algae cells will sink to the bottom and are unable to photosynthesize and eventually die due to lack of light.

1. Create a sound barrier
Blue-green algae and some green algae are capable of travelling through the water vertically due to their possession of gas vesicles. The ultrasonic sound waves create an ultrasonic pressure in the top layer of the water.

2. Control algae growth
The algae will die while the cell wall remains intact, preventing the release of toxins from the algae into the water. The algae will sink to the bottom of the water reservoir and are degraded by the bacteria present. Continuous water quality monitoring combined with web-based software allows for an early warning of toxic algal blooms in lakes, seas, and desalination plants.

A floating buoyance system measures essential algae indicators (Chlorophyll-a, Phycocyanin, and Turbidity) and water quality parameters (Dissolved Oxygen (DO), Redox, pH, and Temperature) in order to monitor the water quality. The measured data can be viewed in real-time via a web-based software called the M.ACE.

2. Predict Algal Blooms
The collected data is delivered in real time via radio, GPRS, or 3G to a web-based software. Based on our developed algorithm we are able to modify the ultrasonic program to the specific water conditions and predict an algae blooms a few days ahead.

3. Control Algae
Based on the received information, the ultrasonic program can be activated according to the water conditions and type of algae present. This way, it is possible to eliminate existing algae and prevent the growth of new algae.

-Effective algae control, it eliminates up to 90% of existing algae and prevents the growth of new algae. Furthermore, the MPC-Buoy allows reduction of TSS, BOD, and chemical consumption
-Safe for the environment, the ultrasound used by Mavic Ace is safe for fish, plants, zooplankton, and insects. Our devices use of low power (5-20 Watts), wherefore no high voltage is transmitted into the water
-No release of toxins, the cell wall of the algae remains intact, preventing the release of toxins from the algae into the water.
-Effective on larger water surfaces, each Mavic Ace device can control algae in areas up to 500m/1600ft in diameter. Multiple buoys can be installed for large water surfaces.
- Low operational costs, the system operates autonomously on solar energy and has an integrated aqua wiper to prevent frequent site visits. 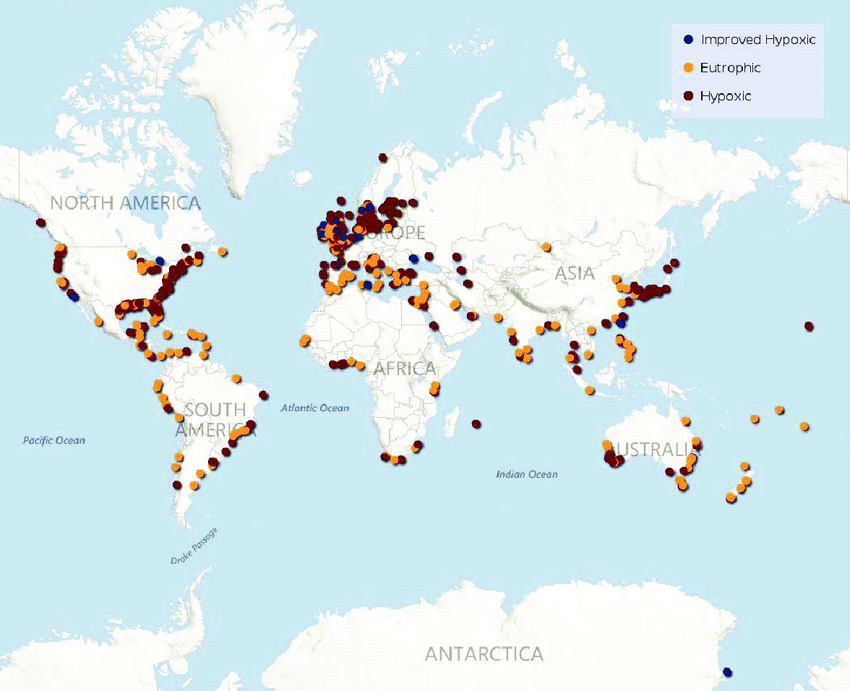 Health and education are severely impacted by a continual lack of safe water. The cliche about Mexico is that tourist shouldn't drink the water. This is the fact about water in Mexico. This can happen at any place around the world. Water is important as it just no used to drinking but also important for farming. Thus, we making Mavic Ace to achieve Goals 6 (Water and Sanitation) underUN Sustainable Development Goals for the better world. The gradual increase of the usage of fertilizers in modern agricultural industries have led to escalated amounts of phosphorus and nitrogen (chemicals from the fertilizers) to flow into the seas from the river nearby plantations , which eventually encourages and helps the growth of algae excessively, resulting in the proliferation of the number of algae decay , requiring oxygen for the decaying process thus the occurrence of oxygen depletion. This phenomenon will result in the death of most, if not all, aquatic creatures living in the affected zones, infamous by the term dead zones. Presently, dead zones have become one of the biggest problems our seas face , despite less attention being given to it.Especially at gulf of Mexico All of this are inspiration from LG SONIC Company who create the MPC Buoy to prevent algae growth but we create this Mavic Ace to clean the water from over growth of algae