Water is an important resource for life and existence. In the whole world, more than 1.2 billion people don’t have access to clean drinkable water. Human negligence would mean denying basic facilities to someone else. This is due to lack of standardization in monitory and control equipment. The project proposes a novel design of smart water management using sensors and analytics. Towards this, the proposed design is implemented in KLE Technological University, Hubballi as a test bed. This project puts forward an IoT-based solution for collecting water level from the tanks using sensors, transmitting it to a centralized server using R-pi, visualizing the data through a web interface and also using AWS cloud. The automated system helps the user monitor the amount of water consumed in various buildings using the consumption details provided by the system.

The implementation of the smart water management system is done in two stages:

1) Processing the data from sensor node (tank) and populating the necessary data to database.
2) Making the data available for visualization.

1a) Point of use (sensor node): On every overhead tank, a processing unit is placed. MSP430G2553(TI controller), JSN-SR04T(waterproof ultrasonic sensor) with HC-12 (transceiver) is used on each tank for data collection.These sensors give the distance of water level in the tanks. The controller wakes up every thirty minutes, senses the water level, transmits it to the gateway and then goes back into deep sleep mode which in turn saves a lot of power The controller available in each overhead tank is conﬁgured to capture the data from sensors and put in the JSON format. The following is the format of data published to the cloud:

”unit”: ”cm”
”level”: 25 
”Node ID”: 1
”type”: ”water level”
’Level’ indicates the level of water sensed by the ultrasonic sensor in the unit, centimeters. ’Node ID’ represents the tank from which the data was received. All the overhead tanks will send data to a central gateway which processes the data.

1b) Data processing : R-pi with WI-FI connectivity is used as gateway. The gateway receives data every thirty minutes. R-pi is conﬁgured to perform the following functionalities:
• Populate the data to the cloud.
• SMS alert to concerned authority when water level goes below or above threshold.
• Auto-control of valves to overhead tank.
The view constitutes web/mobile application and controller constitutes Amazon Web Service (AWS) Dynamo DB, AWS Lambda and other AWS services.

2a) Data visualization and alert system
• When the water level reaches lower threshold of thirty percent, lambda function sends a high signal to the solenoid valve which automatically turns on the valve.
• When the water level reaches the upper threshold of ninety percent, lambda function sends oﬀ signal to the solenoid valve to switch oﬀ.

The visualization of water level is through a web page developed using angular ionic platform. The page has various displays like:
• Graph to indicate water level hourly, daily, weekly or monthly basis.
• It indicates the health of sensors (i.e the battery status) on overhead tank.

The contrivance of internet has completely transformed the world and brought people closer to each other than ever before. The advancement in technology of computing and communication brings the next generation of Internet, Internet of Things (IoT). The population and urbanization increases, the cities have to revolutionize and transform to smart cities which can be achieved with the help of Internet of Things. A smart city is the most promising step to ensure a self-sufficient and sustained environment. The water crisis is the most growing unprecedented threat in the upcoming year as it is estimated that 40% of Indian citizen may not even have suitable drinking water by 2030 hence it is mandatory to have a smart water management system while planning a Smart city.

Our idea provides a standardized wireless approach to managing water judiciously in college and industry campuses.Since, we use low power mode, the average current consumption is just 50uA and has a battery life of 2 years. The communication between sensor node and gateway can happen irrespective of the obstacles. Although there are various systems available, none of them are actually implemented but our system is low cost, user friendly, robust and it is actually being implemented in our own campus successfully. It can easily be multiplied as the cost at the sensor node is just $30 and hence feasible. Lack of water has aﬀected every continent and approximately 2.8 billion mankind around the globe are denied water for at least one month in each year. Hence, our system provides the user to conduct proper management of water as he/she is just one-click away from controlling the supply of water without having to physically go to its actual location. 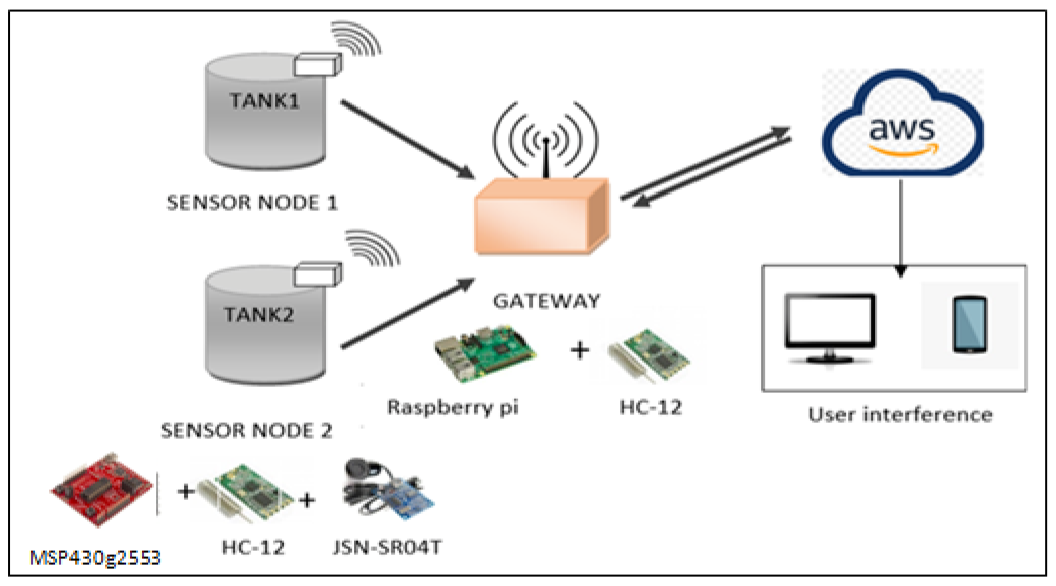 Our day to day observations of wastage of water in large quantities triggered us to design this. A huge campus has too many tanks which are difficult to be managed. As a result of which a lot of water is improperly supplied and is hence being wasted. When we who have safe access to water, waste too much of it, we are snatching away someone else's basic rights. Hence, these is a need of standardized and novel method to monitor the flow and distribution of water judiciously. We used IoT because, IoT is bringing people and devices more closer. Hence, this is used to manage water efficiently.