When people think of contaminated lakes or streams, the images that come to mind are plastic bottles on shores and oil spills on water surfaces. In reality, it is often the contaminants that cannot be seen that will have a greater impact on health and the environment. This includes pharmaceuticals, pesticides, agricultural runoff, industrial waste, road runoff, and countless others. When a contaminant is released into a watercourse, it changes it’s very nature and causes severe damage to the environment. Altering the ph or oxygen content of a stream, for example, can create a toxic environment leaving fish to suffocate or plants to wither away. According to the Atlas of Canada, there are an estimated 31 750 lakes in Canada alone. However, lakes are not the only bodies of water affected by pollution. Creeks, rivers, streams, oceans, groundwater and municipal piping systems for drinking water are all exposed to contamination. The most important step to treating contaminated water is to know that the water is contaminated in the first place. Often times this is done too late. Simply put, there is too much water to monitor with current technology. Our goal is to create a monitoring network made of low costs devices capable of measuring the key indicators of pollution such as pH, turbidity, temperature, conductivity and dissolved oxygen.

Our proposed idea involves using a LoRaWAN connected network of low-power sensor nodes. All sensor nodes (in star topology) would periodically transmit sensor data to an internet-connected gateway. The information collected from the nodes would then be recorded and displayed on a website containing a map of all nodes and statistics/graphs regarding the quality of water over time. It would also be possible to use this information to alert users of dangerous or changing water conditions.

To be more specific, all sensor nodes would be low-power, low cost, and application-specific devices. Each device would consist of a microcontroller, LoRa transmitter, GPS receiver, and various sensors/probes (pH, turbidity, temperature, conductivity and dissolved oxygen). The choice of sensors to be used within the sensor node is intended to be modular in order to allow the user to adapt this system to their needs and reduce costs. In addition, each node would be powered by 18650 cells and would leverage a combination of load switches, sleep modes and waking interrupts from a real-time clock and calendar (RTCC) module to obtain maximum operating lifetime. Although the power consumption of the proposed sensor node is already low, an optional solar cell charging circuit can be added (depending on the user’s preference) to charge the onboard batteries and extend the operational lifetime of the node.

Using LoRa communication, all nodes will be able to send sensor data to an internet-connected gateway up to a range of 15 km, depending on environmental factors. Gateways would simply be a LoRa gateway HAT and a Raspberry Pi connected to the internet (4G, Wifi, Ethernet) and a LoRaWAN network like The Things Network or LoRa Server. These networks allow us to use the data sent to LoRa gateways in order to record, analyze and display on our own webpages. Each gateway is capable of handling hundreds of nodes depending on the frequency of LoRa transmission per sensor node. This makes our system scalable for monitoring the water quality of an entire watershed or any given point of a municipal water distribution system.

In short, our proposed IoT sensor network is intended to be used by governments (municipal and regional), environmental agencies and industries that want to monitor the water quality of waterways, aquatic ecosystems and drinking water. The proposed idea could offer the data at the scale needed for municipal and worldwide recognition and action, all while being modular, easy to implement and power efficient.

A proof of concept of the system has been built and will be used to develop and fine-tune a deployable system for field testing and application. Further research and development will be done in order to add more features and improve the durability of the system. An example of such improvements can include adding a light spectrometer system in order to detect contaminants such as lead. In addition, adding methods of protecting the sensor node/probes from environmental damage (algae, animals, etc.) will need to be added. Also, components and sensors will need to be added/modified to better suit high and low temperatures expected for this system. 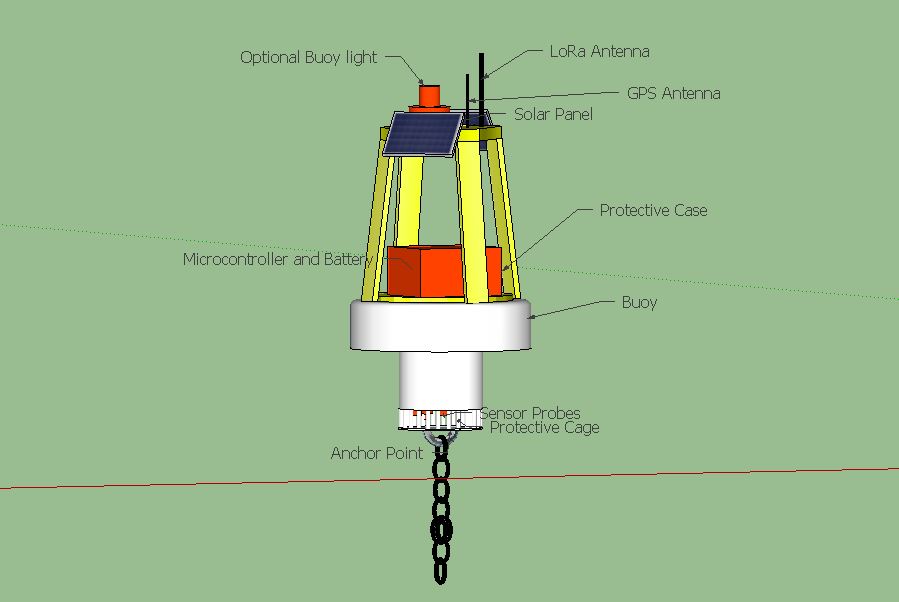 Through research, we found that the recognition of pollution in waterways and drinking water was not easy and difficult to scale up with current technology. Our response to this was to use our backgrounds in engineering (electrical and environmental) to create an IoT sensor network that can realistically be used for water monitoring by environmental agencies and governments worldwide.