Tap water in the developing countries is a hard thing to trust.

In India alone, numerous tourists fall sick every year due to the bad quality of water. What if there was some way to know about the quality of drinking water at a particular place before you go there? And there is no single index available on which the government can act to solve this problem.

This can be made possible with the help of IoT and wireless sensor networks.

The network uses sensors like pH sensor, heavy metals sensor, turbidity sensor and TDS sensor, and the data obtained is sent to the internet using a Raspberry Pi. To communicate with the Raspberry pi using least energy possible, the LoRa technology is used.

Now, there are already some challenges involved in wireless sensor networks:

To tackle these issues a few steps taken are:
1. Using sensors only for a short duration at a time. As the quality of water does not change drastically within an hour or two, the frequency of measurement can be decreased without compromising with the data obtained
2. The cost per node is decreased by using cheaper microcontroller (ATtiny 85) than Arduino. Since only 3-4 sensors are used per node, this decision does not alter the capability of the node.
3. Sensors are generally expensive. But cheap sensors can also be fabricated in lab. Like :
(a) Multifunctional Water Sensors for pH, ORP, and Conductivity Using Only Microfabricated Platinum Electrodes by researchers from university of Michigan and university of oxford. (COST : $0.1 per unit)
(b) Heavy metals sensor by CSIC.
(c) Turbidity sensor by researchers from university of Manchester and University of Reading.
4. Installation of the sensor unit can be made easy by building ready-to-deploy modules containing the sensors and the LoRa module for communication in a single box, having openings for water to be tested.

Sensor nodes will be placed in public water tanks, rivers, and public water filters and will scan the water parameters every one or two hours. Once the nodes are deployed, data from them is sent through LoRa module the the Raspberry pi zero which acts as a gateway. From there, the data is uploaded on the internet to ThingSpeak for online analysis of data and visualization, and it is made available for the general public to view.

Since the range of LoRa technology at max is around 10 Km, 300 sq km of area can be scanned when network is in star topology.

The data obtained from the single location on pH, turbidity, and heavy metal content, etc can be combined to form a single index of drinkability (like AQI : air quality index). Governments can use that data to fight pollution and Tourists which are planning to visit a certain place can look this data up and can predict whether they will fall sick on the trip. The power consumed per node is very less due to low power sensors used and frequency of measurement being low and hence even a 3.7V Li-ion cell can be used to power the whole thing for a long time (almost two years).

Additionally, cheap solar cells can be used with rechargeable batteries to extend the lifetime to years without much cost. When the sensor is not sending data, the battery charges. The raspberry pi can be located in a government office to provide continuous power and internet connectivity.

A web based mobile app can be developed in order to serve this data. The app would compare the drinkability of two places and hence users can find out the chance of falling sick more accurately without the help of additional computing.

Moreover, sensors can also measure parameters of last rainfall which is an indication of pollution level in air of a particular place.

Also, if in a hour or so, water becomes toxic due to activities like sewer lines breaking and mixing into water lines, biological terrorism, sensors will pick up that data and will issue area wide alerts to the public, not to drink the infected water.

Cost per node is calculated roughly as follows:

Therefore total cost with specialized sensors = USD 16.5 per node (excluding the RPi because only one is used per cluster). Clearly, the cost per node is very affordable. 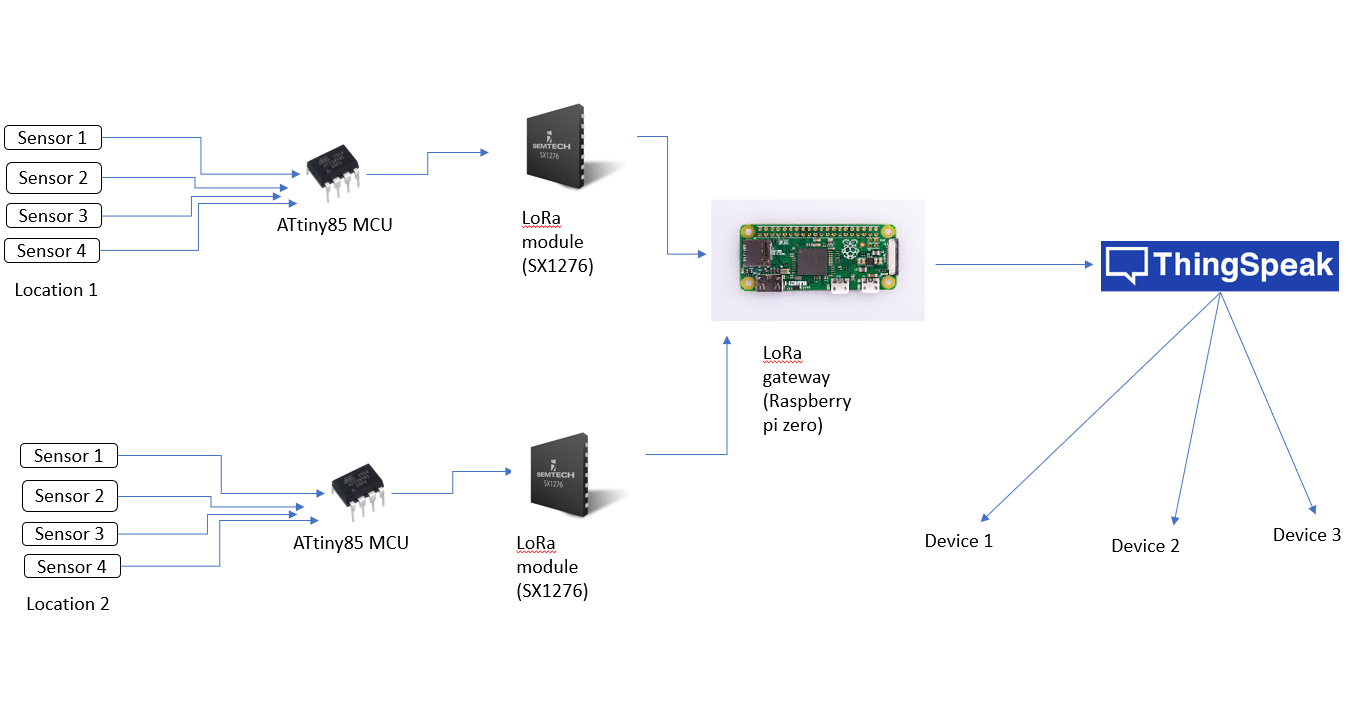 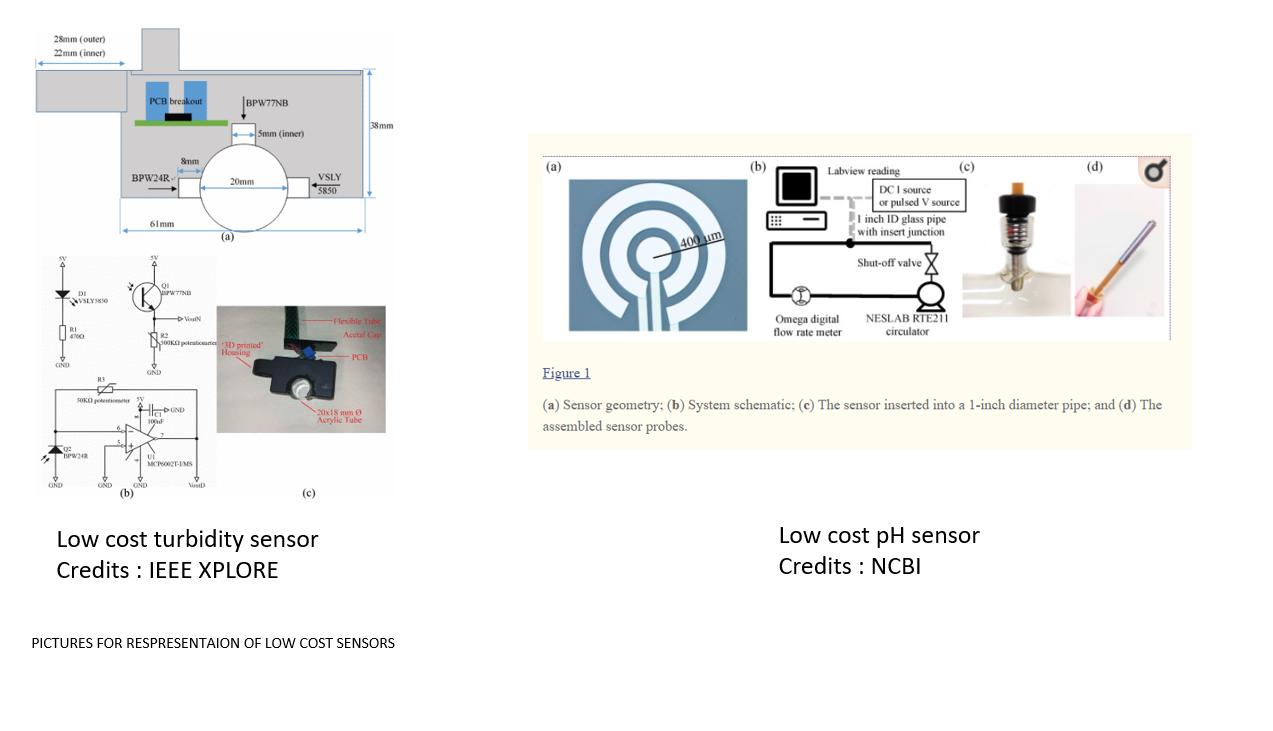 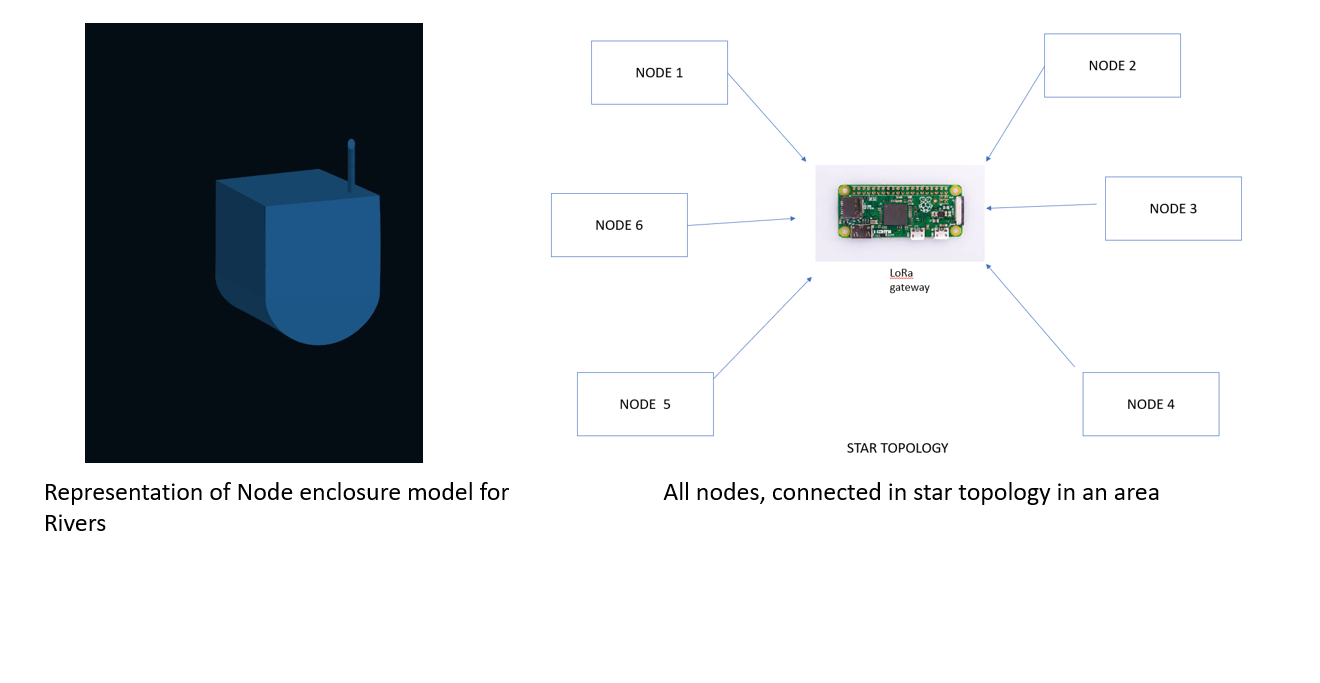 A lot of tourists that come to India and other south Asian nations fall sick due to bad quality of water. The same is for the people living in that area. If there were some method to find if the water of a place is drinkable or not, people could be certain whether or not to drink that. Sometimes, like in my hometown, Rishikesh, tap water is not harmful, but people are anyways scared and tourists from abroad have to buy plastic water bottle which would eventually harm the environment. If my idea gets implemented, it would clarify and mark the places where there is a need to do proper treatment of water, and of what qualities of water (pH, heavy metal content, etc). Also, acid rain is received by a lot of parts of countries like India and China. However, there is not much emphasis on measuring quality of rainwater, which is bad if we want to monitor changes in the local environment. I was also annoyed by those industries which have an environmental clearance from the government but yet their discharges pollute the rivers heavily. The real time data on water quality of river near the industries shall keep their untreated discharges in check, and eventually help us save the water resource which is rapidly disappearing.