Air pollution poses significant risks to both environment and health. At present, air quality monitoring stations are often confined to only a small number of locations due to the high cost of the monitoring equipment. They provide a low fidelity picture of the air quality in the city; local variations and pockets with high densities of pollutants are overlooked. However, recent developments in low cost sensor technology and wireless communication systems like Internet of Things (IoT) provide an opportunity to use arrayed sensor networks to measure air quality, in real time, at a large number of locations.

CAIRNet is the development of a novel low-cost sensor node that utilizes cost-effective electrochemical sensors to measure Carbon Monoxide and Nitrogen Dioxide concentrations and an infrared sensor to measure Particulate Matter levels. The node can be powered by either solar-recharged battery or mains supply. It is capable of long-range and low power communication over public or private LoRaWAN IoT network and short-range high data rate communication over Wi-Fi.

The developed sensor unit is solar powered, weather resistant and designed to be easily mounted to lamp posts or walls and capable of measuring CO, NO2, particulate matters (PM10) along with temperature and humidity. The sensor node utilizes a Murata chipset consisting of a STM32 low power microcontroller paired with Semtech SX1276 LoRaWAN radio. The microcontroller contains the firmware for implementing the LoRaWAN protocol stack but also provides the embedded computation for measuring the signals from the sensors. Five ADC channels are required for collecting the sensor data, two for each of the gas sensors and one for the PM sensors. The temperature/humidity sensor uses I2C protocol to transfer data. General Purpose Input Output (GPIO) pins are used to control the fan and the PM sensor. Before transmission, the data from the five sensors are grouped into a 128-bit packet. The microcontroller then processes the packet according to the LoRaWAN specification and then pipes the data to SX1276 which transmits the data at a career frequency of 923MHz. The microcontroller communicates with the ESP8266 Wi-Fi chip in the battery module via UART. This provides a means of network debugging and allows for a much higher data rate than LoRaWAN. However, Wi-Fi is much more power intensive and must have a suitable supply. The UART/Wi-Fi interface also provides an alternate means for firmware updates of the nodes.

The sensor node has both fixed and variable current (i.e. power) draws. The fixed draw is required regardless of whether measurements are being taken. The biggest contribution to this comes from the gas sensors which require a constant current of 2mA. When taking measurements, the most expensive component to run is the fan which draws 155mA for 60ms. The power budget varies depending on the frequency of measurement. If few readings are taken the fixed power costs dominate, otherwise if many readings are taken then the costs associated with taking a measurement contribute the most. With full sunlight, the batteries can be fully recharged in 5 hours and will last between 6 and 50 days depending on measurement frequency.

The data collected from the sensor nodes is ultimately displayed on a web page for end-users. For data to reach an end-user, it must be transported in three different stages: from device to gateway, then from gateway to network server and finally from network server to application server. The developed sensor nodes operate over a LoRaWAN IoT network. In addition, the data can be sent over WiFi (if an access point is available) by piping out data to the Wi-Fi chip hosted in the power management module. LoRaWAN allows for flexibility in the use of gateways. A proprietary gateway such as a Multitech conduit can be used to receive the IoT data with no cost after the initial hardware purchase. Alternatively, the sensors can connect to a commercial network of gateways. The advantage of this approach is the flexibility in deployment over a much larger area without needing to manage several gateways but per message costs apply. Forwarding of the packets from the gateway to a desired Internet end-point, such as an application server or a database, is similar for the two gateway options. The network server responsible for routing the packets received by the gateway is configured to send the data to specific application servers depending on which sensor nodes the data originated from. 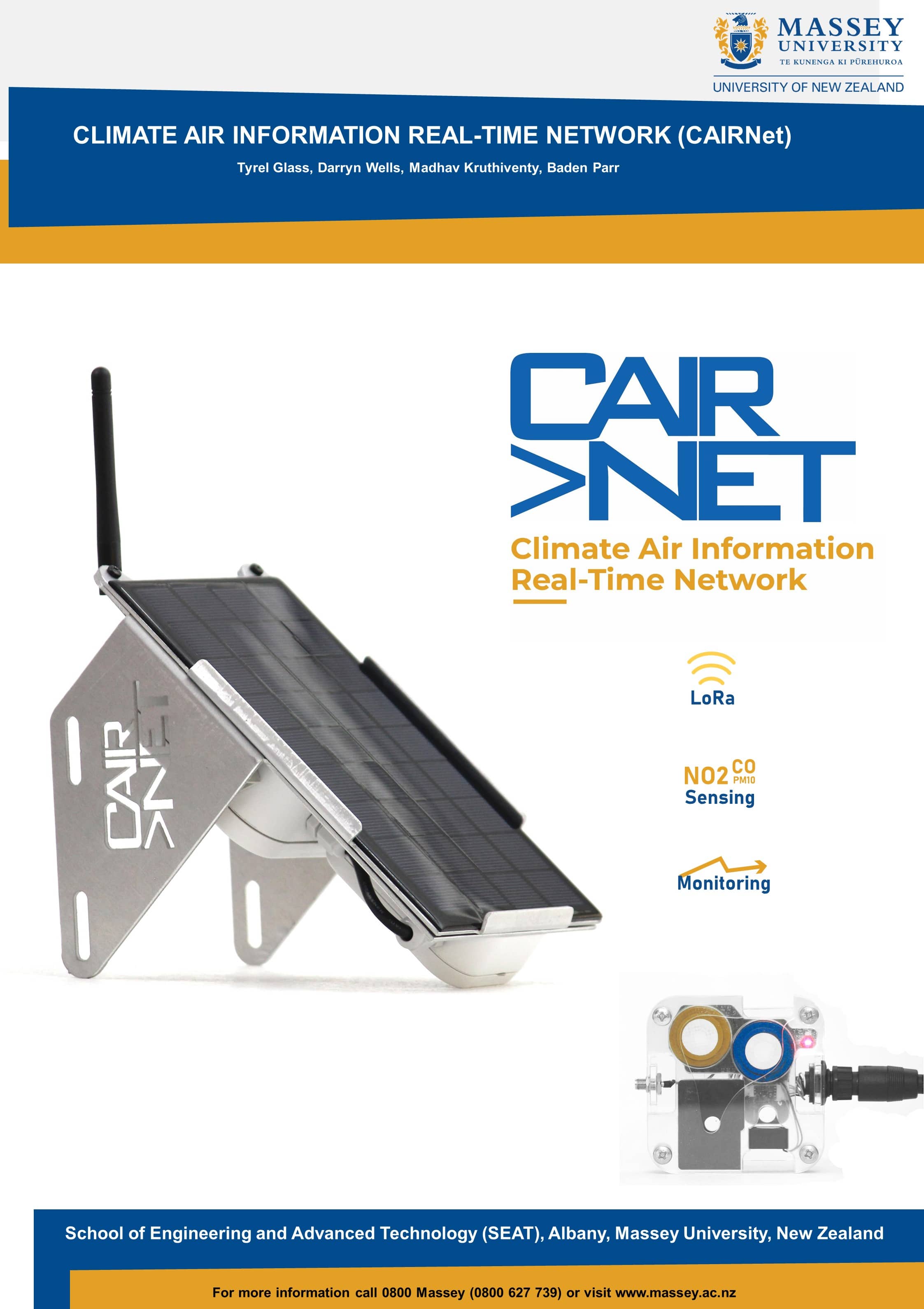 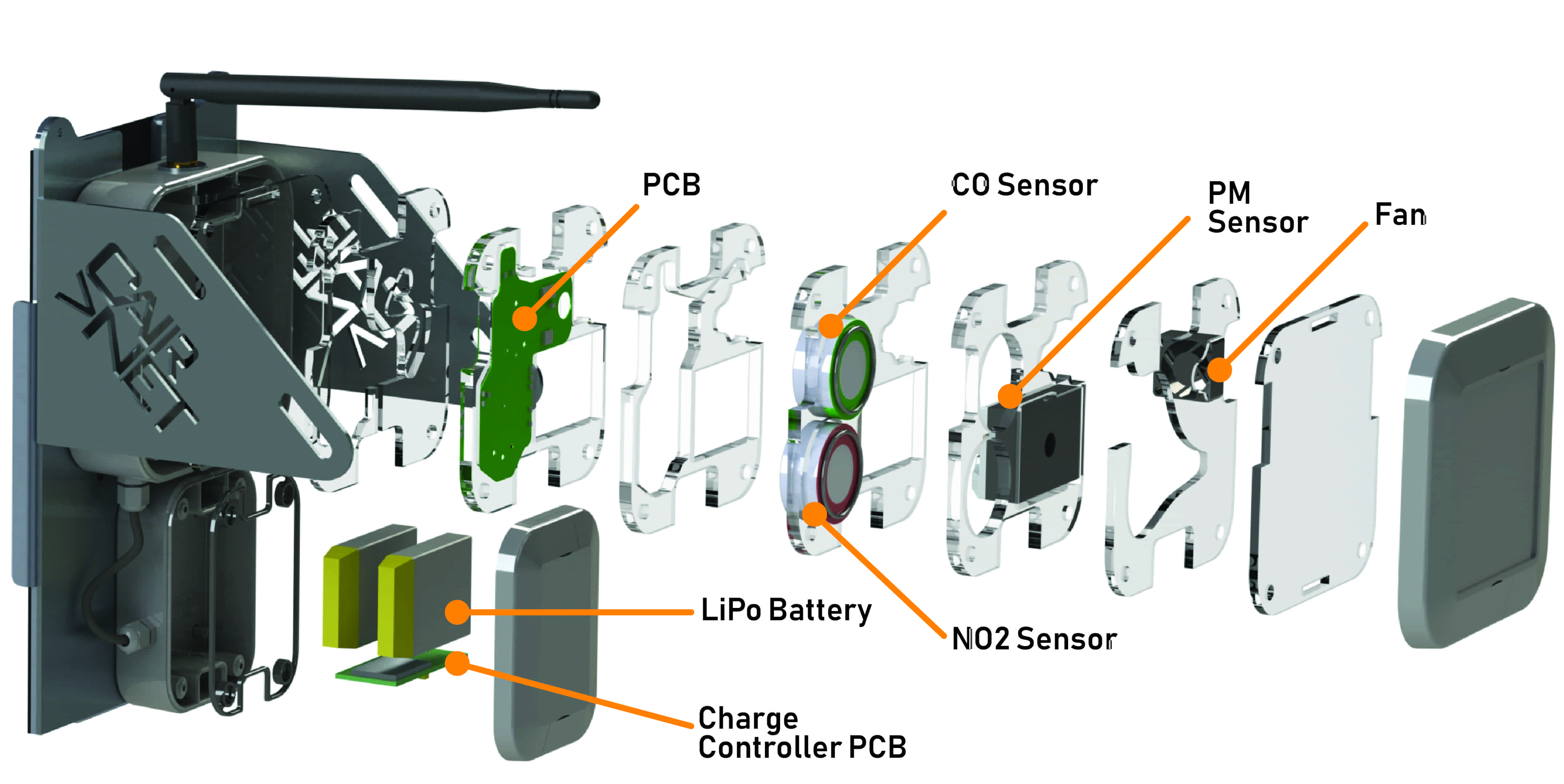 Air pollution has significant impact on the quality of life and public health. Severely polluted air also leads to environmental problems and climate change. Monitoring of air pollution is of significant importance to raise public awareness and involvement in human health and sustainable urban environments.