The Beehive Network to Create a Smart Land

Air:
It is said in 2016 the annual median exposure to ambient PM2.5 in China was 48.8 μg/m3 - more than four times higher than WHO recommendations.

Data:
Network is connected the Internet, but not fully. Google, Facebook and Twitter are still blocked in China.

Noise:
In first tier city, the noise pollution is very big - already become a concern for most of the citizens. Construction noise was the most common complaint, with 50.1 percent, followed by noise from industrial companies (16.9%), human-generated noise (21%) and vehicle traffic (12%).

Development:
Developing Country - means these thing may be getting worse.

That is the reason why I think build a network like this.

Network Design
Beehive way is used in a lot of places like CDMA Network and creates a stable structure. It allows the minimization of the amount of used material to reach minimal weight and minimal material cost. So that is the reason we create such a method to create a sensor network. These are the details that in different aspects, what density and what kind of network we should deploy.

Public:
Very High Density in Industry Area. Low Density in Other Area in urban. Industrial pollution is the release of wastes and pollutants generated by industrial activities into the natural environments including air, water, and land. Since the pollution has last vert long time (Starting in the 18th century and gaining popularity in the 19th century). So, we need to pay attention to it.

Air pollution is different from water is because air can flow in unrestricted places, the speed of wind only determines the speed of spreading PM2.5 particulate. When monitor air using beehive network and given to the amount of pollutions of the industry production – especially heavy industry, we should monitor much more in Industry area, less in other.

Private:
Depends on the environment of home, it should be decided by him/herself.

Water pollution is different from air and other is because water pollute land and water pollutes can spreading to anything next to it. When monitor air using beehive network and given to the amount of pollutions of the industry production – especially heavy industry, we should monitor more in Industry area, and should also monitor other places – a little less.

Data:
Data Monitoring is Different. We are using Every Device to Get Status of Network.

Clients (Phones, PCs, PlayStation, Xbox): Learning the user’s habit (require an AI-chip) to get a list of domains which user loves to visit. Request and get response. Delete the information that considers private or confidential, then share (can be closed).

Middleware (Routers and base station): Learning all the users’ habit (require an AI-chip) to get a list of domains which users love to visit. Request and get response. Delete the information that considers private or confidential, then share (can be closed) in the intranet.

Servers: Learning the connection to get a list of IPs which we have most connection. Generating reports. then share to the intranet (can be closed) Delete the information that considers private or confidential if needed.

In China: Construction noise was the most common. And because industry area is faraway from city, it become the second thing need to worry about. And most of the noise – because blocked by thick walls , don’t require a lot of attention and It also has the same level of noise in the city, so that is the reason we need Construction area comes first.

Private:
Depends on the environment of home, it should be decided by him/herself.

Public: When a request sends to a server A, A should check the Token. If Token is not expired, send the data cached. Else we request data from sensor and get token, then send data back to requester.

Private A: When a request sends to a server A. A should check Table. If find the corresponding IP address of sensor, send back IP. Else we should inform the requester there is no such device.

Private B: The Request direct send to the sensor and they communicate.

Innovation here is privacy and cost-effiency. It's potential impact will be huge it is cost-effeicent, city will be more comfortable to live, everyone can live better. 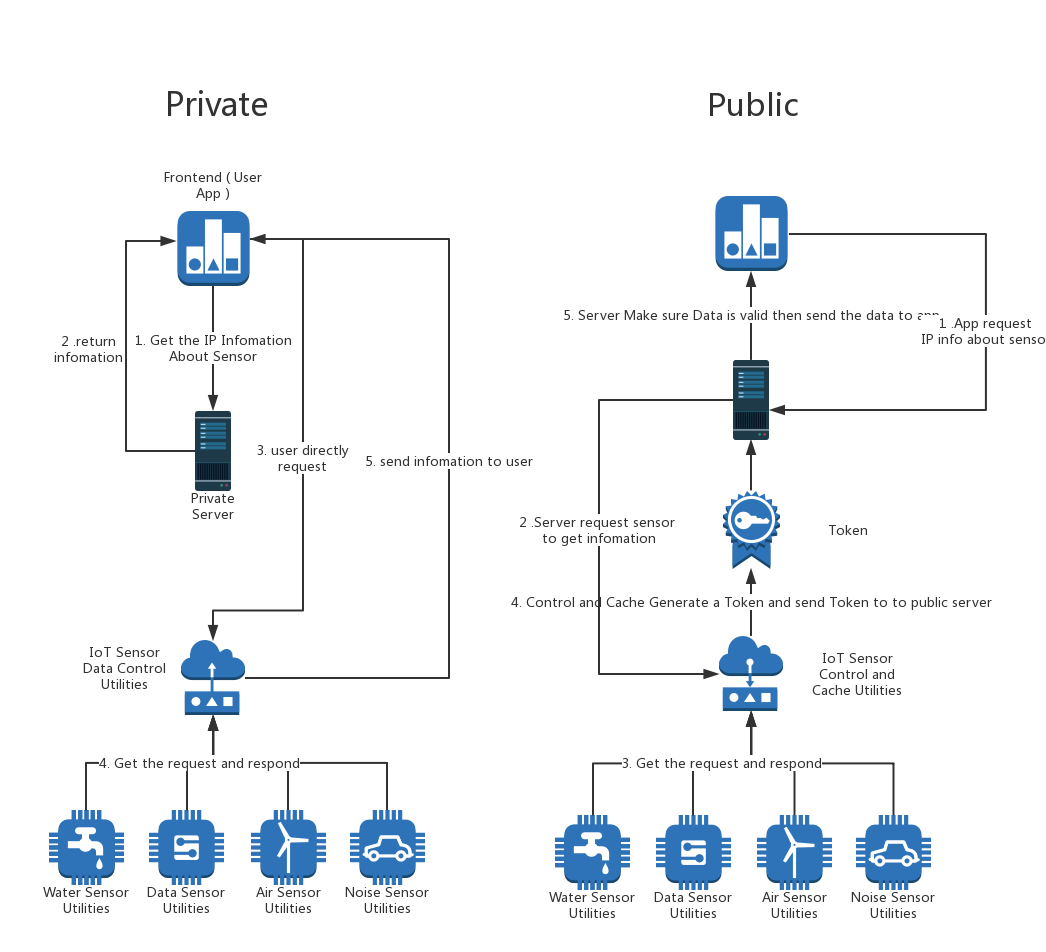 First is that we want do this, we can do this. and we will do this. Second is that we can use better techs, for the betterhood to the humans, do the better things. the knowledge we learn, the skill we mastered, the thing we do, should always be in this way. IoT is the future of human, and my major has serveal connections. Third is because we live in the best of time as we live in the worst of time. we face the problem that no one in history face, we create the things that no one in history create, as the saying goes "he who desires but act not breeding pestilence", we solve the problem. -- As the air to a bird or the sea to a fish, so is the problem to the solver.