Silicon Valley is home to many wealthy tech companies, yet it still suffers from high rates of homelessness and people living with food instability. For those who are unsure of where their next meal will come from, food banks are a decent option but there are several factors that reduce their effectiveness. People may lack reliable transportation to travel to these food banks which are often in inconvenient locations. Additionally, many food banks are understaffed or underfunded.

Distributed food banks solves all three of these problems. Each of our distributed food bank units are self sufficient so they are not reliant on volunteers or employees. The distributed nature of the system means that people won’t have to travel as far. Donations can be easily raised in person or through an app to fund the system.

Community food sharing is not a new idea, however with the advantages of the IoT and our innovative design improvements, our distributed food bank allows for a more effective solution through easy administration, monitoring, and optimization.

Each distributed food bank unit is a box made from laser cut plywood which is bolted together. This design makes units inexpensive and easy to repair. Electronics are placed in an insulated box near the base.

An ultrasonic sensor located at the top of the container is used to measure the height of the food contents within. This height combined with the weight from a load cell on the bottom can give an estimate on the volume and density of the food inside. Project limitations in cost and power consumption do not allow for more accurate forms of object detection, although techniques like computer vision and machine learning were considered. Instead to combat misuse of the unit, a philosophy of close observation and redundancy was applied by watching for unnatural data patterns and deploying more than the minimum number of units.

Material cost and power consumption were key factors in the design process. After several iterations we were able to reduce power consumption to less than 2mAh per day, allowing for a 1000mAh battery to last over a year. Additionally a production cost of $60 per unit makes deployment feasible. A roughly 4 block area in San Jose bordered by North Market and West Santa Clara street was chosen as a possible location for a trial run due to its proximity to both a relatively large homeless population on the west and a busy economic area on the east. A fleet of five food banks would cost around $300 and could remain active for a year with periodic maintenance.

Our distributed food bank units take advantage of our smartphone heavy culture. For a variety of reasons some people may not be comfortable giving directly to those who need it. Our system helps facilitate this transaction and adds the instant gratification many users seek. With our app a user would be able to donate money to support our distributed system just as casually as they share a tweet or call an Uber. Our app will also be able to connect to social media profiles allowing friends to compare how much they have donated over the course of weeks or months.

One of the benefits to a connected food bank is the ability to collect and analyse data. Sensors can collect data on things like the number of people that walk by, the temperature, time of day, or amount of food donated and collected. This data could be used to optimize the location of each connected food bank map. Data could also be shared to other groups working on food insecurity.

All data will be processed by an ATmega32U4 and stored to an sd card every 15 minutes. Every hour data is the sent through a mesh network of radio transmitters and receivers where it is then connected to a gateway that uploads the data to a web server. We are using LoRa for our radio translations which is a low energy, long range frequency modulation technique.

Our design was developed for the urban United States culture we are familiar with, but with more research the food banks could be modified to work around the world in different environments. Modifications could include refrigeration or solar panels. 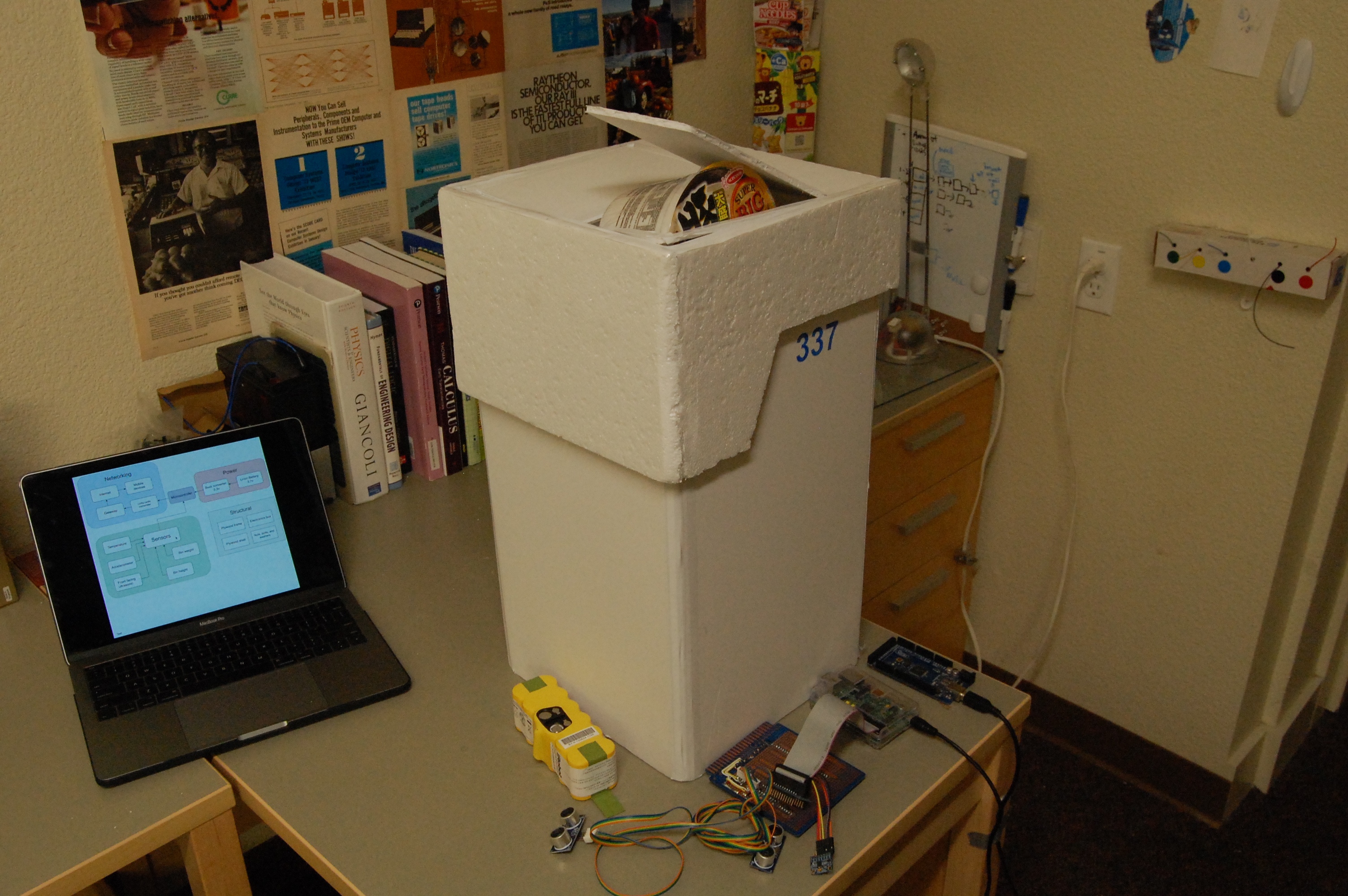 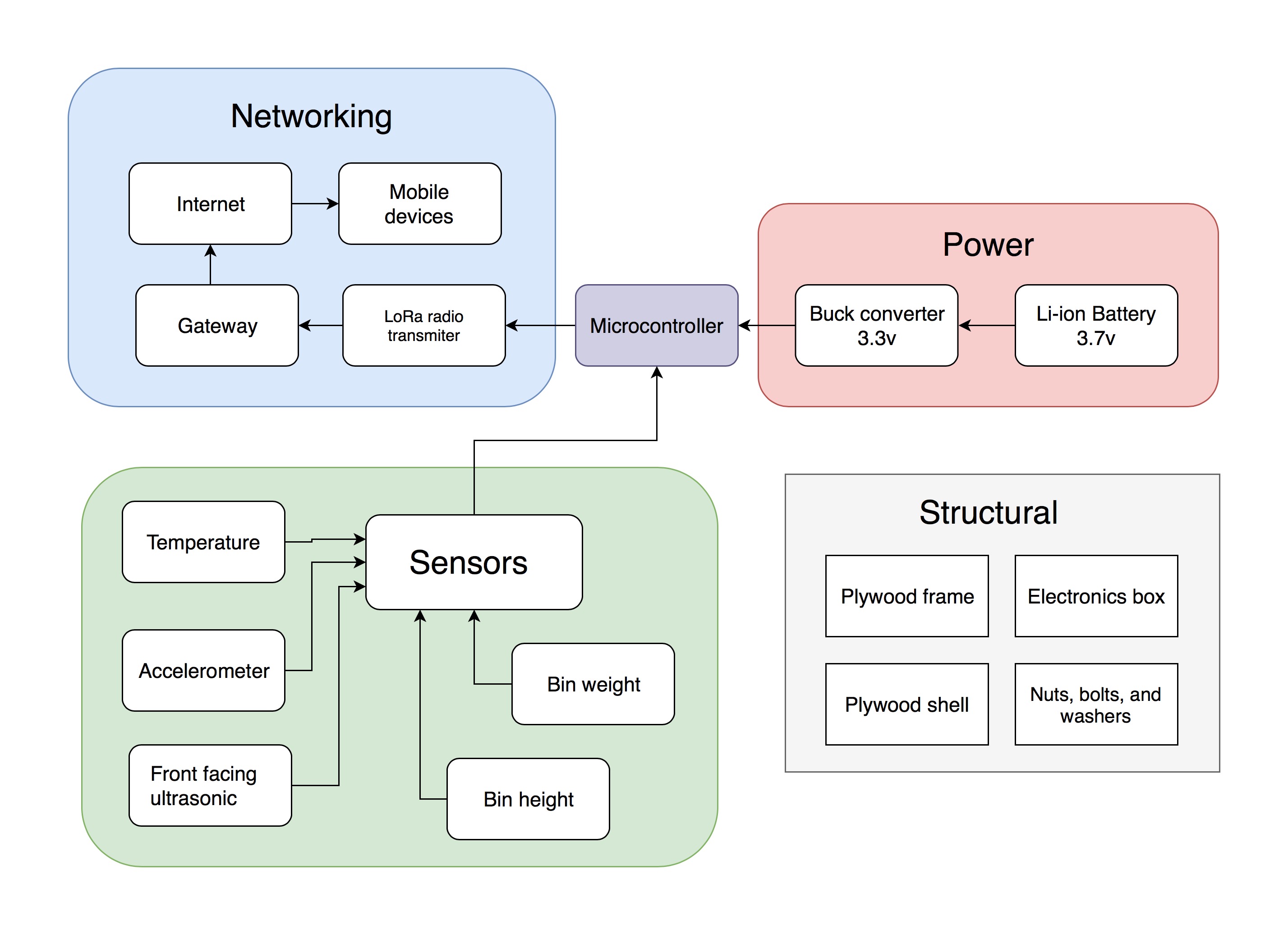 I’m a student at Santa Clara University. It’s a Jesuit college which means there is a big emphasis on helping others. Often students choose to do this by designing projects for people around the world but I saw a need closer to home. Even though I have the opportunity to go to nice school, if you walk just a few minutes off campus you’ll see that poverty is a huge problem in the San Jose area. I take pride in being apart of the innovative culture of Silicon Valley but if we can’t solve problems in our own backyard, then how are we going to change the world? My hope is that tech like connected food banks will allow people to live better lives, or at least make the issue more visible.