As we all know the air quality in the urban areas are so poor that in few places it is not even safe to breathe. So in future, quality air becomes the most important requirement. In order to resolve this issue, we’ve designed the model to check the quality of air in the urban areas especially near hospitals and public places like parks and in crowded streets and by analysing the data we’ll identify the areas as good, average and bad. We’ll then activate the mechanism so that the air quality which has identified as bad should increase to prescribed levels. We’re planning for the infrastructure as that of Google Wind that has been implemented in Netherlands.

As the population density increases in urban areas, there exists a need to optimize the usage of water and to supply good quality of water (potable water) to the people. For this we’ve designed a model in which we’ve network of sensors are placed in every level of water supply (from the source to the end- consumer) to check the quality of water and to prevent the leakage of water as much as possible in every level. This sensor network also helps us to estimate the life-time of equipments used for water supply and to keep a track on the maintenance history of each and every component. Water recycling is the need of the scenario so we’ve included this also. We’re placing sensors in required places to monitor the leakages and once the recycling process is completed we’ll once again test the quality of water and keep the record for which purpose and to where the recycled water is supplied. Through our sensor network we can administrate the water supply of the city in the most efficient way.

When it comes to sound pollution, the main victims are the people residing near industrial areas. So, we’ve designed a sensor network to measure the sound levels in the industries and if it exceeds the prescribed limits more than once, the industry will be fined for their act as a mark of punishment. This will be inevitable to maintain the healthy urban living condition for people.

The sensor network that we’re talking about works using LoRa protocol, Digi mesh protocal and for better computational speed we’re using Raspberry Pi and various other sensors based on the requirement. All the sensor-networks (Air, Water, Sound monitoring) are integrated to visualise the actual situation in the area and to resolve any problem in the least time possible through the sensor-network collected data. The collected data is stored in a server and is processed using ML techniques to predict the accuracy of sensor-network and to calculate and resolve the leakages (if any).

As we’re using LoRa protocol from communication, the receivers and datacenter may be placed in the outskirts of the city and manufacturing of the sensor-network will be cost-effective due to large scale manufacturing. Since the power consumed by these equipment’s are very low, it is also an energy-effective solution. 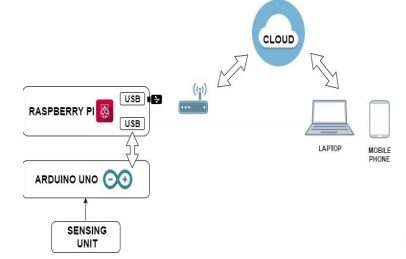 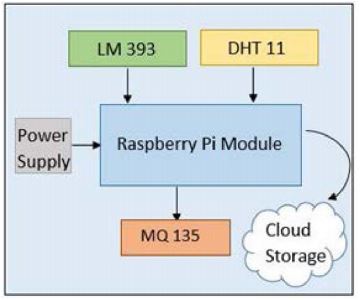 IoT is the trending technology in the world and it as great future a head. As a technical students also wants to be part of the present world trend ...that is IoT......!!!!!!!