The Automation and Optimization Laboratory (AOL) at The Ohio State University proposes using a team of heterogeneous unmanned ground robots to patrol the urban landscape and gather necessary data as a submission to the Keysight IoT Innovation Challenge for a Smart Land solution. The rovers are energy sustainable by using solar energy to power the motors and sensors and to charge onboard backup batteries. This capability provides significant independence from the energy grid. In addition, they are adaptable to their environments by continuously patrolling along routine routes or can be provided special instructions through wireless communications.

Each team includes several types of robots including larger rovers with sizeable batteries and solar panels, medium-sized rovers with a comparably shorter range that also utilize solar power, and smaller rovers which require charging from either of the other types of rovers. All these rovers would be fitted with sensors that can measure urban air, data, and sound quality.

The variety of ground robots allows the entire system to operate with flexibility in a nonhomogeneous, urban environment by patrolling the city with different routes. For example, a small rover that AOL developed has the ability to roll on wheels yet also jump to hard-to-reach areas that require data gathering, such as unevenly paved alleyways, that cannot be traversed by wheels or tracks that are not large enough on the other rovers. On the other hand, open areas are more fitting for larger robots, also having been developed by AOL, which can cover larger distances with its batteries and solar panels. Such environments include city squares or metropolitan parks. In turn, medium-sized rovers fill the gaps between the large and small rovers which include typical city blocks and residential boroughs.

In order to maintain the system’s sustainability, charging can be accomplished through solar panels by the large and medium sized rovers while in the sunlight on patrol or instructions to sit static in the sun outside their route when the batteries have been depleted to a threshold. In the latter situation, rovers will switch places with other rovers that retain higher charge on their batteries or idling rovers may fill the patrol route. On the other hand, smaller rovers without solar panels, such as the ones with jumping capabilities, will need to find a large or medium-sized rover in order or replenish the charge on their batteries. While this may seem inefficient, smaller rovers weigh less and are planned to have smaller areas of coverage. As a result, smaller rovers will have less power usage and predictably infrequent charge cycles compared to their larger counterparts.

First, area coverage. Traditional methods of covering a large area, in this case a square kilometer, would require many stations which drives up costs. Instead, using fewer mobile rovers negates the need to blanket a large area with sensors since rovers can travel between city blocks.

Second, the depth of coverage is superior to traditional passive monitoring. For example, observation stations would be unsightly to people in a metropolitan park, but a robot silently passing through would be subjectively less invasive. Or it could be deemed that an observation station in a small alleyway wouldn’t be cost-effective, but a small robot could simply cover that area on its routine patrol.

Third, points and areas of observation are easily adaptable to a rapidly changing environment. For example, if a street is under maintenance, a rover may be instructed to patrol and measure the air and sound quality near the given street more frequently in order to study the effects of construction crews in the area. Or if a large sporting event is occurring at a stadium, a rover may be directed to remain stationary nearby to measure the effect a large concentration of people has on data quality in wireless networks.

The rovers are constructed with cheap and mass-produced materials that require basic and well-established fabrication procedures such as laser cutting and soldering. This includes durable plastic framing as well as off-the-shelf circuit boards and processors. The required sensors can also be found in through various, mass market electronics providers. These factors allow the cost of production to stay low and any maintenance can be easily implemented. Proper, thorough coverage of one square kilometer would not require many rovers which also aids in lowering overall costs.

The use of these rovers provides a method to monitor city conditions in a depth and breadth not yet seen in urban data gathering. Since cities have high concentrations of people and quickly changing circumstances, it makes sense to have an environment monitoring system that is ready to adapt at a moment’s notice. With these rover teams, measuring the quality of life for city residents will be comprehensive and consistent with the ever-changing environment. In addition, the rovers implemented will be sustainable, cheap, and efficient throughout their life cycle. 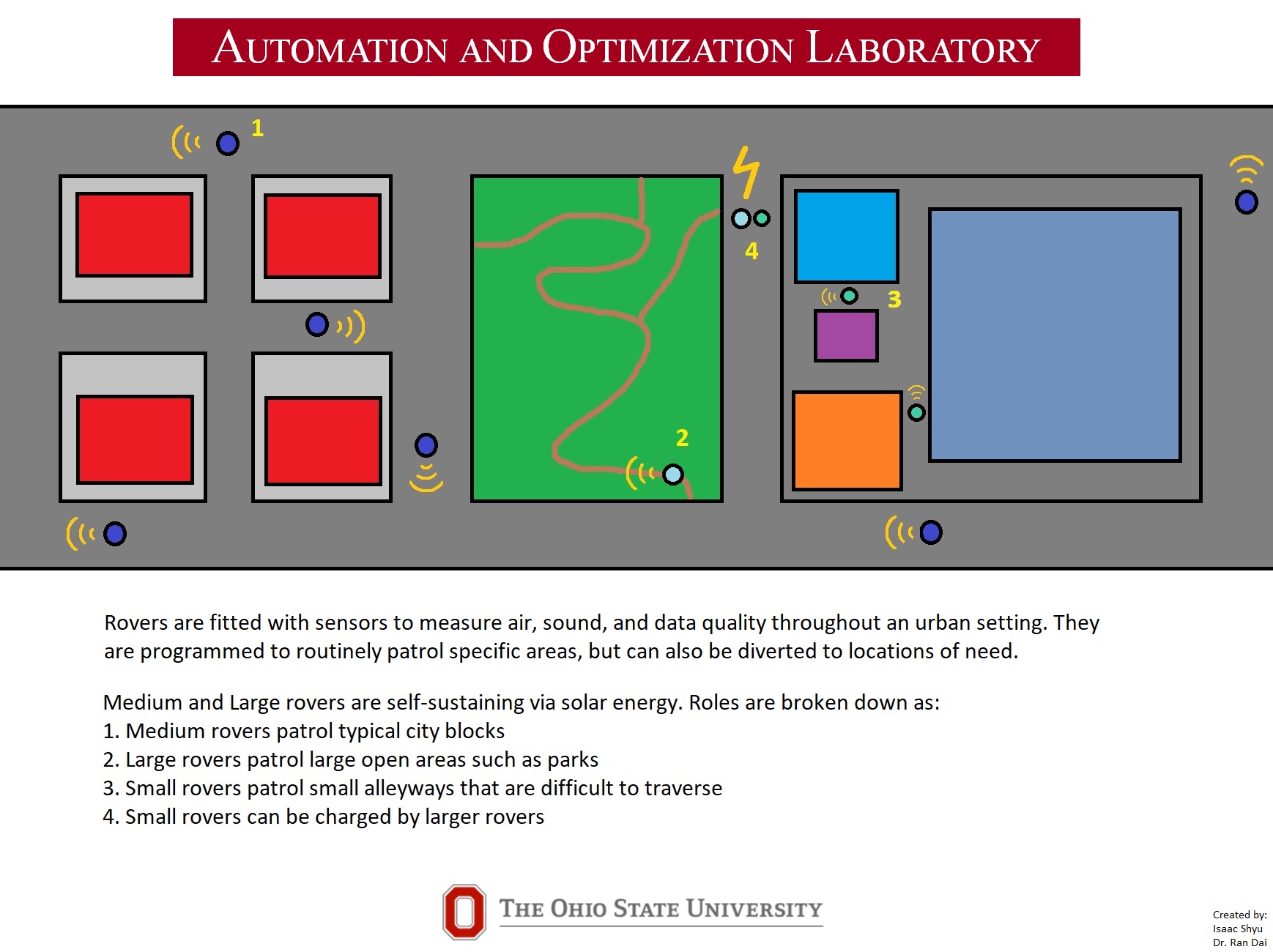 The Automation and Optimization Laboratory (AOL) at The Ohio State University is always looking for new challenges to overcome in the automation field. This includes difficult path-finding, networking, and cooperation problems in robotics. The Keysight Technologies IoT Challenge invites submissions that contain unique solutions and the use of robots as a sensor network provides a new idea.