LEROY: Life Expectancy Raised by One Year, Around the Globe

One year, that is how long air pollution is reducing the average human life expectancy by in the year of 2018.

On October 30th, 2018, the first WHO Global Conference on Air Pollution and Health identified lacking of enough air quality monitoring as one of the critical difficulties toward solving air pollution problem. That is why our proposed system focuses on monitoring air quality as the first step of solving this problem. Then we can hopefully take back that one-year loss of life expectancy, i.e., LEROY - Life Expectancy Raised by One Year.

Many attempts have already been made to solve this air quality monitoring issue, both commercially and academically. However, commercial products, such as low-power air quality monitors sold on Amazon, have up to 6-week battery life at best and also limited to less than 0.2 square kilometer wireless coverage. Academic researches are limited to experiments in the lab level, and there is no ready-to-deploy low-power wide-range IoT system. The proposed project will bridge the gap between academic research and ready-to-deploy IoT system by developing a low-cost, low-power and wide-range wireless air quality monitoring system called LEROY (Life Expectancy Raised by One Year).

LEROY is a cost effective IoT system that utilizes existing hardware together with an ad hoc network protocol. As shown in the figure of system overview, there is one hub (responsible for sending out command and further process data) and many edge nodes (responsible for collecting sensor data) in one LEROY system. Each node consists of an STM32 MCU, a LoRa RF transmitter and any number of sensors. Total cost of an edge node with three sensors is $35.86, including $2.68 for STM32, $13.18 LoRa RF transmitter and $20 for three air pollutant sensors. This price will dramatically decrease when components are bought in bulk.

Firstly, selective modular wake-up mechanism enables LEROY to work for one-year-long time on a 6LR61 battery. This mechanism divides each LEROY edge node into smaller modules so that more components can sleep for as long as possible. Traditional approaches may have only two states, i.e., a sleep state and a work state. In LEROY, however, finer states are designed, including sleep state, listening state, data collection state and transmission state. Their operations are shown in the figure of finite state machine. The detailed state cycle procedure is listed as follows:

The expected battery life using a 6LR61 battery is:

Secondly, plug-and-play feature makes LEROY flexible for different application scenarios. LEROY can measure up to five types of pollutants, including PM2.5, PM10, ozone, sulfur dioxide and carbon monoxide, which are identified as top five major pollutants of urban air pollution. However, every location differs in their major air pollutants. For example, in California, fine particulate matter, ground-level ozone and carbon monoxide are the most sever ones; however, in New York, fine particulate matter and sulfur dioxide are the most sever ones. Therefore, we may selectively choose sensors to connect to the MCU via RS485 port. In this way, any number of sensors can be connected in parallel. This feature gives user the flexibility in selecting sensors without additional configuration, and further reduces the cost and power consumption of LEROY.

In addition, there are many other auxiliary features of LEROY, including 3.14 square kilometer coverage range due to the LoRa RF transmitter, reliable communication latency because of the network’s star topology, and lower cost edge node due to this simple network protocol for end devices. 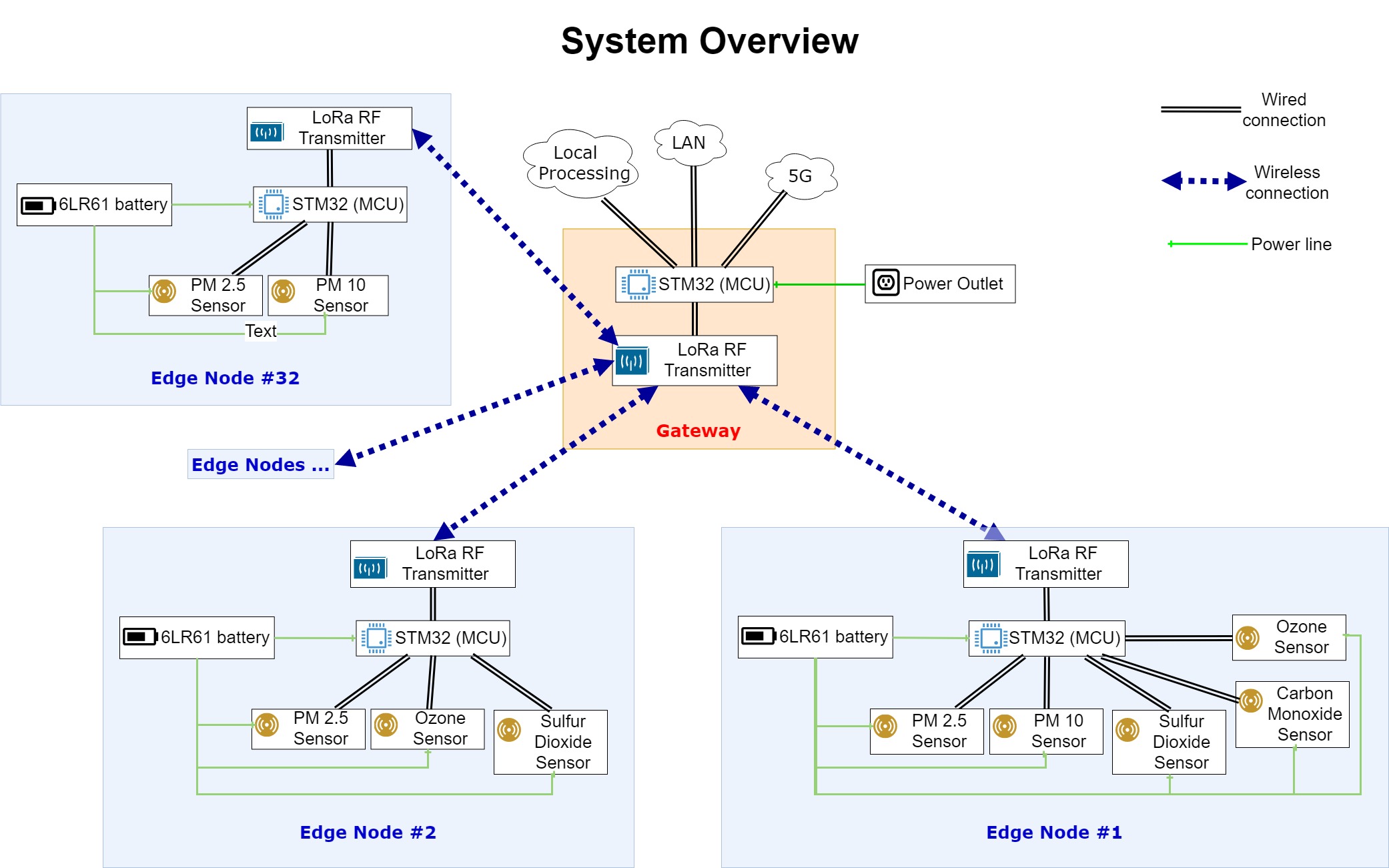 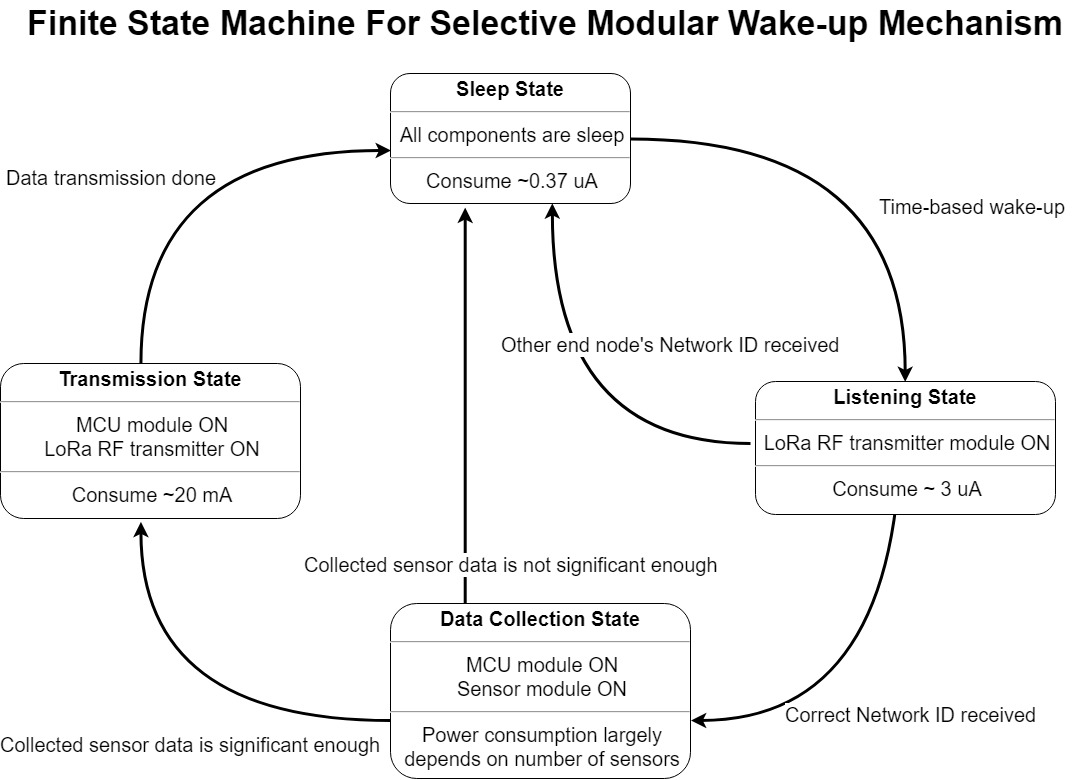 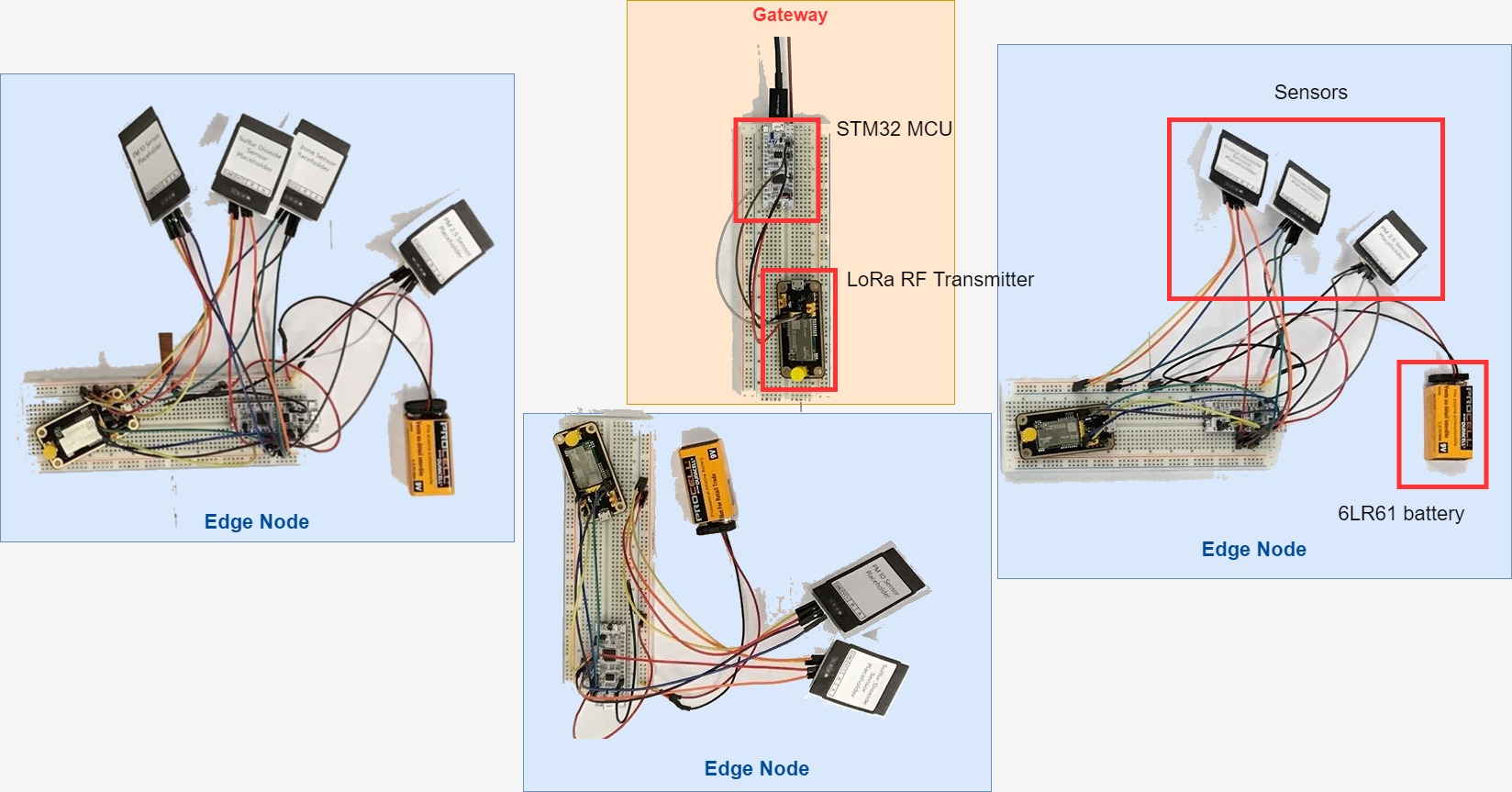 On May 22nd, 2017, WHO updated its Global Urban Ambient Air Pollution Database to show that more than 80% of people living in urban areas are exposed to unhealthy or even hazardous air environment. WHO recently also estimates that seven million people are killed worldwide by air pollution every year. In addition, air pollution attributes to 43% of deaths from lung disease, 25% of deaths from heart disease and 24% of deaths from stroke. Air pollution is an invisible yet deadly killer to human health, therefore, the very first step of solving air pollution problem is to monitor the air quality. However, there is no air quality monitoring system with long battery life on the market, so it is difficult to widely deploy air monitoring systems. Our proposed LEROY system will be the first product level quality implementation of academic research, bringing a low-power wide-range air quality monitoring system to the real world so that human can take back the one-year loss of life expectancy around the globe.