With the current world scenario there is a need to develop a system which is not single application based but rather with many features which help us i.e. Humans, to live a better life. One such system is Integrated System for Advanced Fuel Transmitter (ISAFT). An integrated system which comes with many features that are more efficient, effective and provide less power consumption, re-generation of energy, minimizing air pollution and the most prominent one is that it reduces the damages caused during accidents, thus providing safety to Human Life.

Energy Re-Generation Using AC Generators:
We all know about the extensive use of fossil fuel and for sustaining in the future we need to come up with new solutions and one is Electric Vehicles. The question which arises with the regular use of Electric Vehicles is the range and their battery life. Most of them at an average have a range from 80-200km. Further we cannot increase battery storage capacity as it will affect the performance due to the excess weight. In order to re-generate energy we will attach AC Generators in the rotating axle attached to the wheels. So by this we will generate Electrical Energy from the Rotating Kinetic Energy, which is in turn form off Mechanical Energy. The electrical energy will be of AC in nature, with the help of AC-DC Converters we will convert it into DC and store it in the batteries. Further this stored energy can be used to power the electric needs inside the car like the lighting, indicators etc.

Safety of Human Life:
It is often observed that accidents brings along huge amount of heat liberation in the form of fire, etc. Thereby causing huge damage to people inside the car. The main reason for this is that the fuel tank comes in contact with the heat liberation and causes fire. Thereby with the Advances Flow of Fuel Mechanism we can reduce the damage. In the mechanism we will have to install another fuel tank which will be smaller in size when compared to usual fuel tank size, let it be called Secondary Fuel Tank and the original i.e. the usual fuel tank be called Primary Fuel Tank. The Primary Tank will be made up of Fire Resisting Material and coated with Fire Resisted Material. Further, the entire fuel will be initially stored in the Primary Tank. When the car starts, the fuel will flow from the Primary Tank to Secondary Tank. The path connecting Primary and Secondary will be governed with the valve. By this, during the time of accident, the major part of the fuel can be prevented from coming in contact with the heat liberation and reduce damage caused to a greater extent, as the Primary Tank is Fire Resistant in nature.

Advanced Features which are governed by IOT & Embedded Systems:
With the use of Raspberry Pi, through IOT we can control the AC of the car, see the Fuel Flow Management and see how much Fuel was saved by effective fuel transmission. Further with the installed sensors and Embedded Systems, it will notify the user about the insights of the vehicle, like the Engine Performance Report, Energy Management in the vehicle and Damage in the vehicle, which will help in having proper maintenance of the vehicle. It will be supported with Start-Stop System, which will stop the engine when it’s idling i.e. during traffic jam, and start when needed, thereby reducing idle emissions and maintaining controlled Fuel Flow Management.

Innovation:
1.) As we all know, one of the major reason for Air Pollution is the emissions from the vehicles, and the reasons for the emissions from the vehicles are:
• Improper Fuel Flow Management i.e. excessive flow, etc.
• Not Proper Maintenance of the Vehicles.
The effects of the above reasons will be reduced by using ISAFT.
2.) Further and the foremost is the Safety of Human Life. In a year many people lose their lives in the accidents, with ISAFT the damage will be reduced to a greater extent.
3.) With the Energy Re- Generation Concept we can utilize that stored energy in lot many ways and we can build up an Electric Car with this Energy Re-Generation System installed, thereby giving it a new edge of generating energy and using it to power itself.
4.) The Start-Stop System which will help in reducing emissions and minimizing Air Pollution. 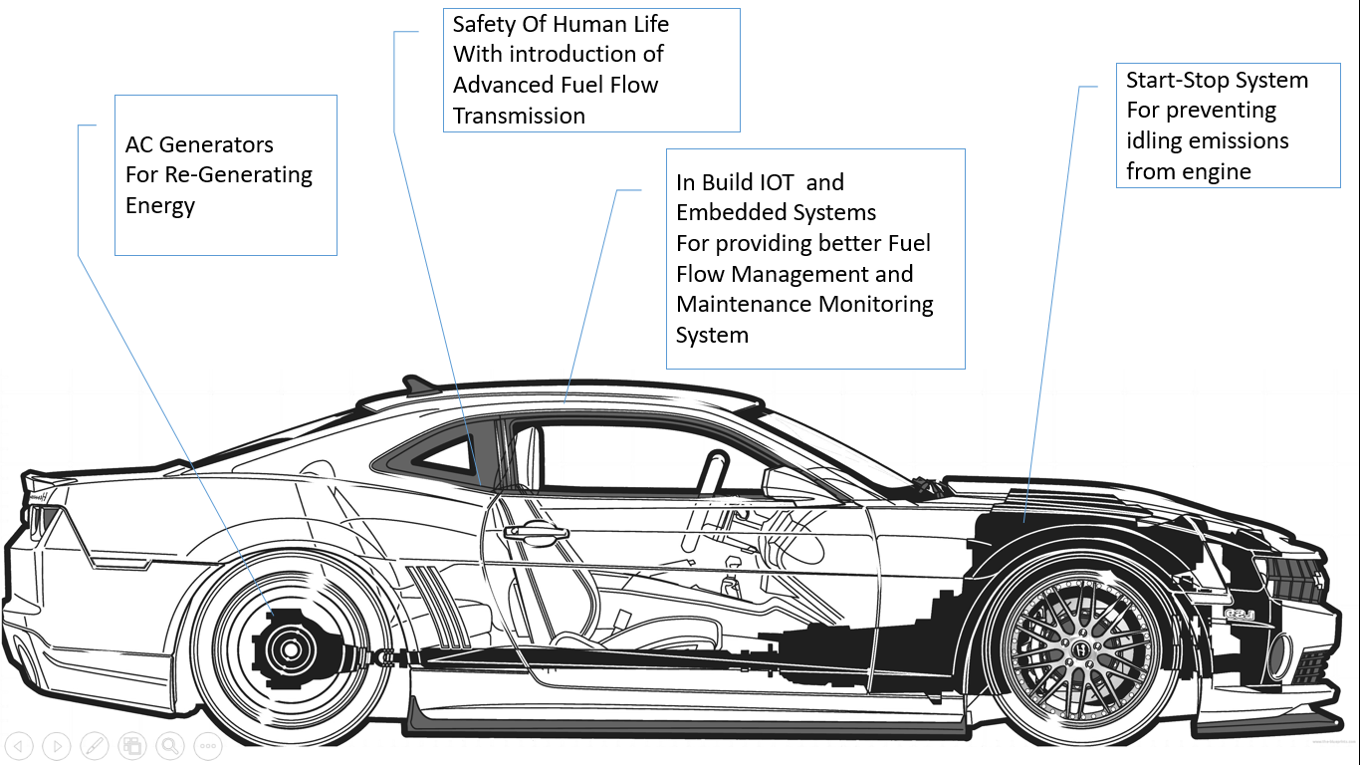 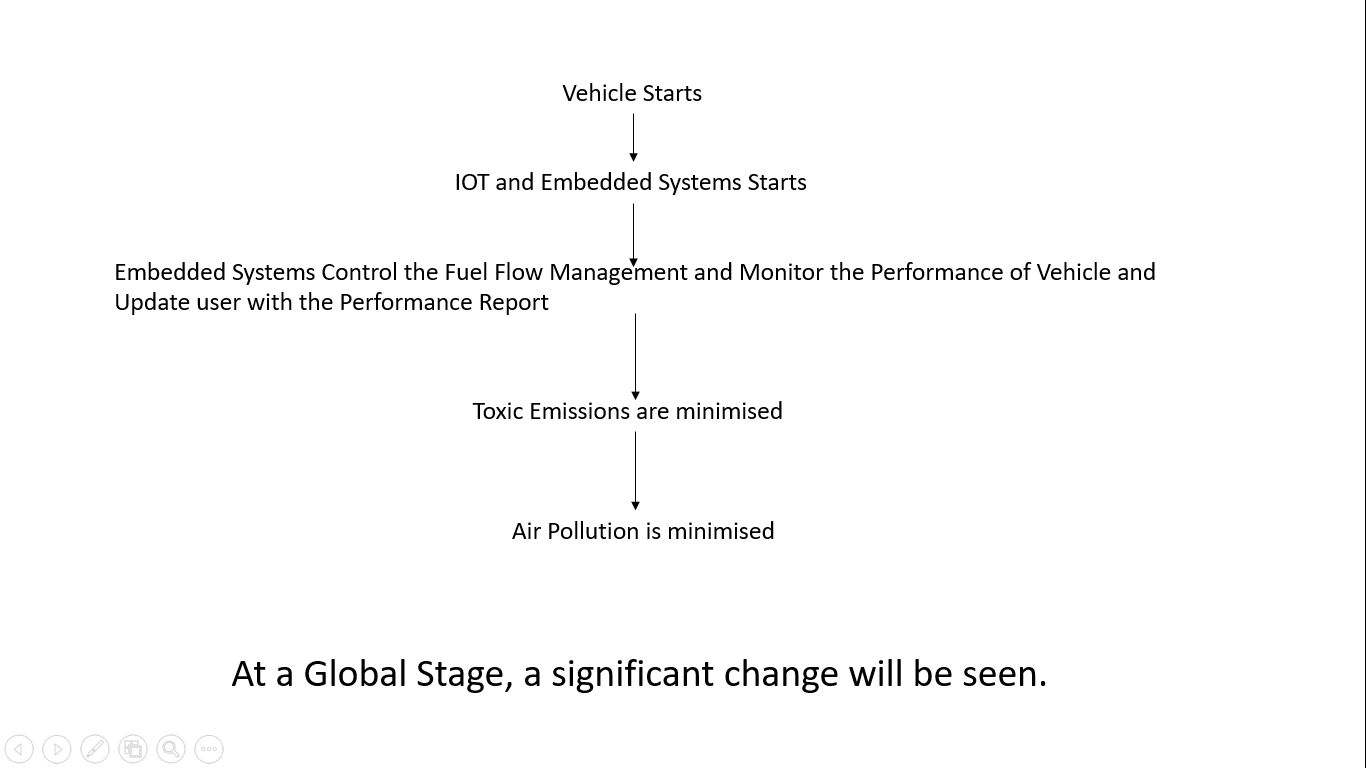 At the global stage emissions from vehicles are major contributors for the exponentially rising Air Pollution. So we decided to build a system which will try to minimise the emissions from the vehicles, thereby trying to reach the root cause of the problem and solving it. Further we listed down the reasons for emissions from the car and started to target those areas and come up with an idea to solve it. Therefore for monitoring performance we came up with Monitoring System and for re-generating energy we came up with Re-Generating System, as is near future fossil fuels won't last long, therefore generated electrical energy can be used.