The team Tech-Geek set out to create a device incorporated the internet of things (IoT). The internet of Things is the implementation of internet connectivity of everyday electronics by using sensors and microcontrollers to gather data, processing that data and displaying it to the user interface. Team Tech-Geek created a device which will easily be able to control and monitor electrical gadgets' on/off status. When any fault is detected in any ELCB or MCB, it trips down but we are not able to know whether which device is faulty or which device causes the fault.

In our system, we control our ELCB/MCB with the internet of Things and we can monitor the status of ELCB/MCB. The main advantage of the system is we can detect from which device the fault occurs. The concept of our system is we have a node in each device and which sends data to the main master. We have the feature of auto reclose in MCB and ELCB in our system.

The advantage is that this system is converted to a home automation system in which we can control each gadget individually. We have the auto reclosing system and IoT controlled system at present. We need to develop the mesh of the network to communicate with each other and give the live status of each device. For the IoT we are using nodemcu (esp8266 or esp32).

The system consists of components like the servo motor, esp8266 or esp32 and limit switch. The voltage feedback from the switch is given to the controller and this feedback is given to servo motor and also status to the application. As we press any switch from the app, we can control that device. 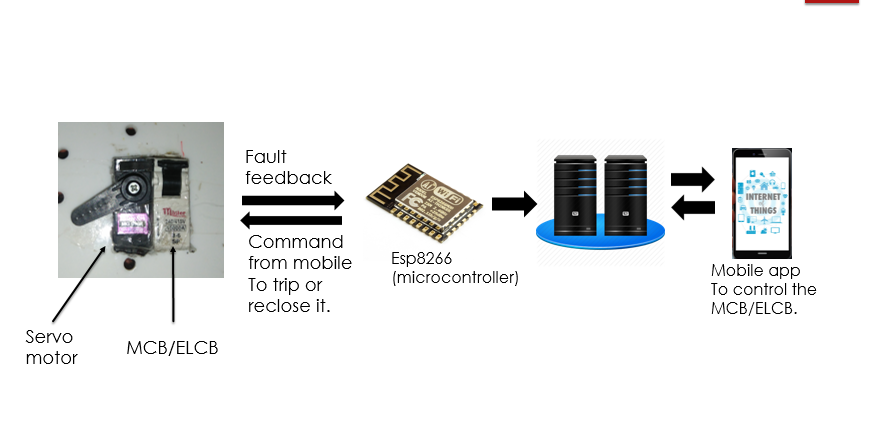 we analyze and experience some problem related to fault or short circuit occur in any device, the elcb or mcb trips down. Then we need to reclose it manually. So we developed a system which reclose the system automatically and give the staus through IOT and we can also control the device with it.