Introduction:
***************
Every citizen of the world deserves a healthy environment to live in. Everyone deserves to wake up to the sounds of birds chirping in the trees and the first breath in the morning to be filled with freshness. This is why we’ve decided to build something that will help us achieve clean air and quiet surroundings.

According to the WHO report ‘Burden of disease from environmental noise,’ there is, without a doubt, a causal relation between environmental noise pollution and various health issues such as cardiovascular disease, cognitive impairment, sleep disturbance, and tinnitus. WHO also states that the lack of visible smog is no indication that the air is healthy. Across the world, both cities and villages are seeing toxic pollutants in the air exceed the average annual values recommended by their air quality guidelines. WHO also claims that air quality monitoring in low- and middle-income countries needs to be strengthened. Low-cost sensors and other new technologies can expand air quality monitoring and forecasting to areas that are currently under-served

Our system can also be extended to give a metric of real-time traffic information in the area using AQ and sound measurements.

In the future, we could also use the data to help people who commute via non-polluting means, such as cycling or walking, minimizing their encounters with poor quality environments. We plan to have a modular, yet hierarchical network of air quality and sound level sensors to collect required data in a robust and efficient, yet cost-effective manner.

Our network includes worker sensor units that communicate with master nodes, which then relay the data to the cloud in real time, to be processed. The inferred statistics are then made available to the user through a mobile app that tells them the air and sound quality of a region now, and over the past few days. Using this network topology, we optimize the cost of laying out such a system without compromising on fine location details and power utilised.

We zeroed down on two types of units in the network, which work together to accurately analyze the environment, with minimal costs. The master unit contains the expensive GPS, computation and communication components, while the worker units contain the sensors and microphone, and basic RF infrastructure to transmit data. The power requirements of the two units are different, enabling us to save a lot of power through the worker units. The estimated battery life for our system is 3 days, with efficient rationing of power to the antennas, only powering it at key moments. The solar panels have been chosen such that they can recharge our components in 11 hours. This means that each battery will effectively be recharged 120 times a year, well within the specification of 800 recharges.

Using the above components, the maximum range between a sensor and a master node can be 300m. For an area of 1 sq km, six master nodes will be placed in such a way so that each sensor has at least three master nodes within its communication range ensuring no loss of information even if a master node is temporarily down. Master nodes have GPS modules, and can also map sensor information using RF mapping algorithms.

Since the worker nodes have no GPS module, their coordinates are calibrated using triangulation by two or more master nodes. RF mapping of sensors also helps us make the system more modular; making the addition or removal of sensors from the network simple and quick. The master nodes are connected to the internet, and upload the collected data to the cloud, making data available in real-time by updating every minute.

Using the data we collect from the speaker, we perform an analysis on the intensities and frequency content and we determine the road traffic intensity, with which we create a geospatial map. 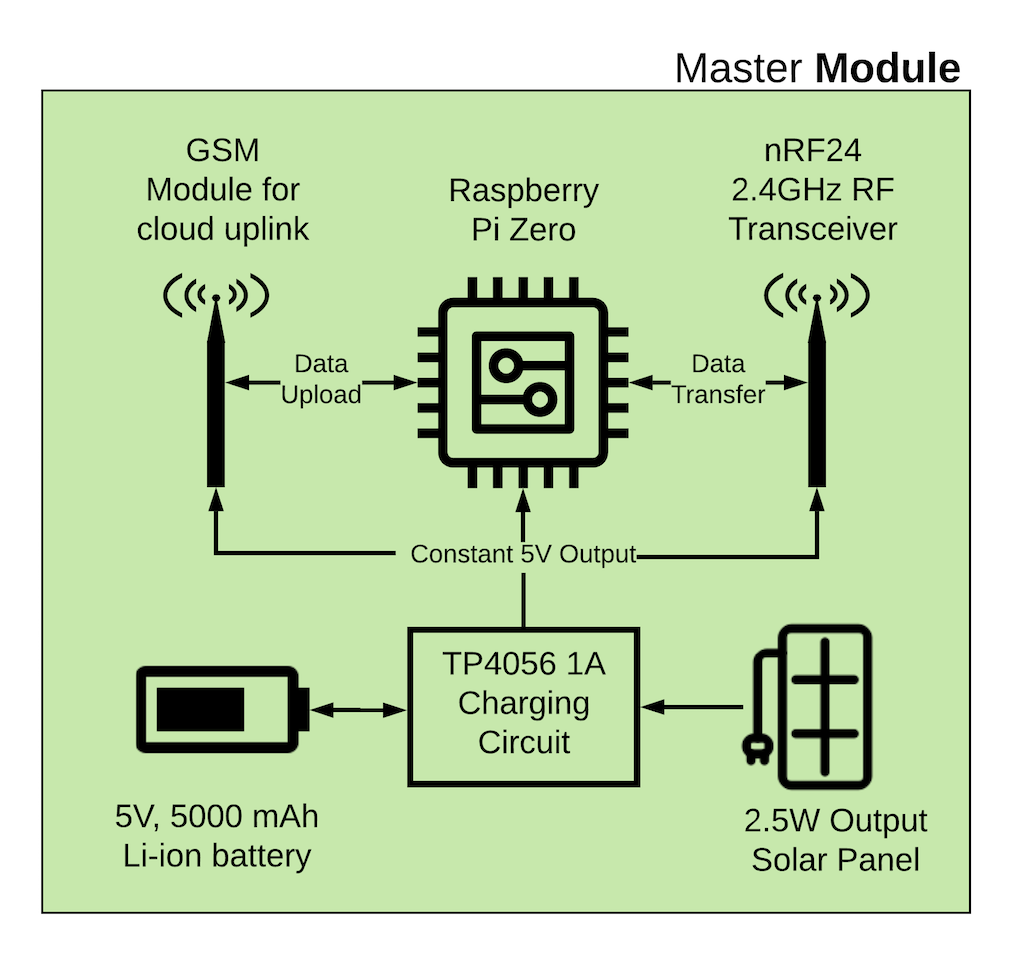 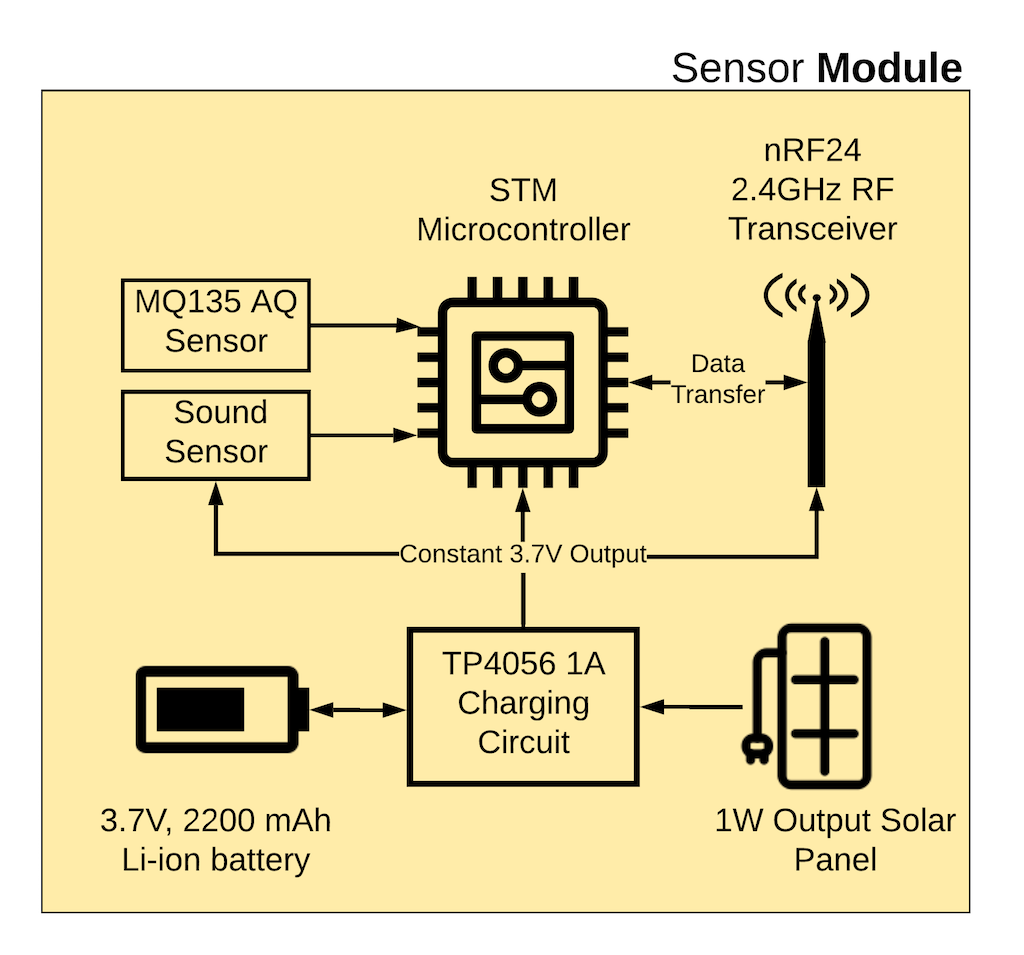 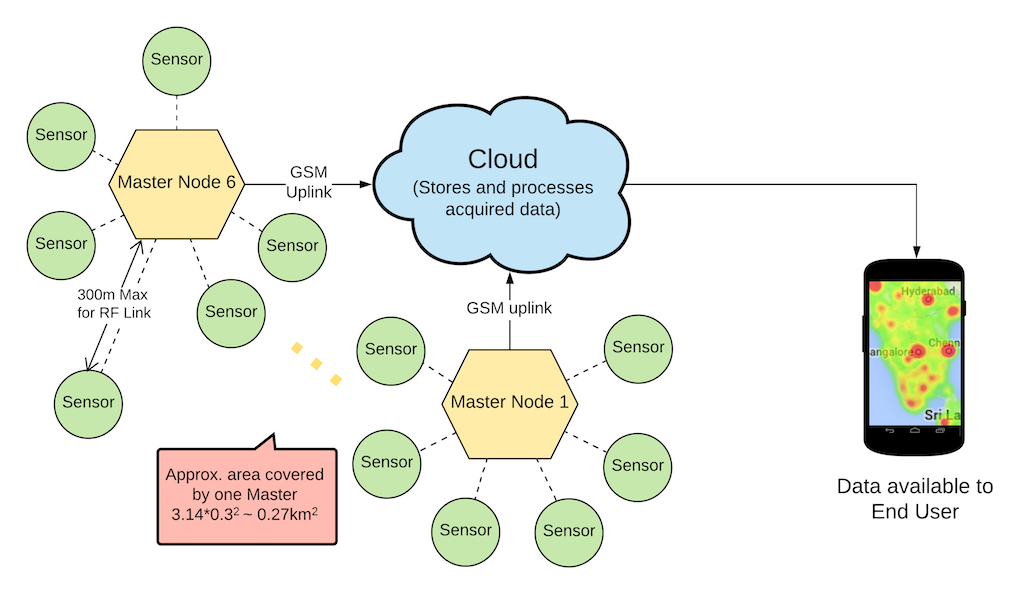 We have all lived in an urban area for the major part of our lives, right up to the point where college started. Our campus is a secluded region (basically a forest in the midst of the city), and the silence and clean air we experience there is so intoxicating that the outside city feels very unpleasant. It’s our dream to take at least a small step towards making our entire city and the world feel like the way our campus does, every day of the year. Also, being students of electrical engineering, we love Mr. Mehdi Sadaghdar’s ElectroBOOM channel, through which we got to know about this competition. We thought it would be cool to make an entry, and possibly meet him at MakerFaire.